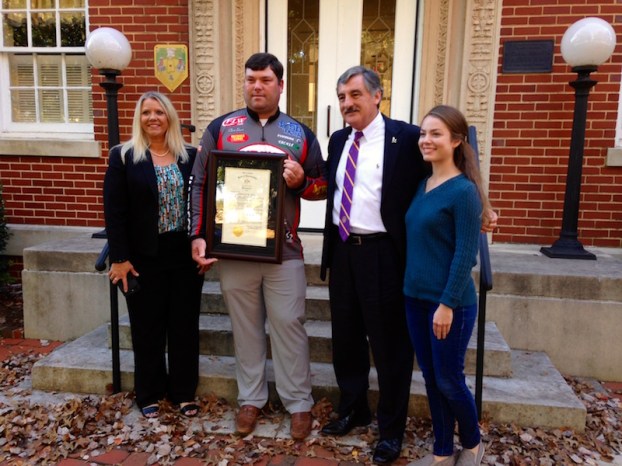 By NANCY WILSTACH / Special to the Reporter

MONTEVALLO – Remember when you were a kid and played the card game “Go Fish”?

Well, the University of Montevallo’s Clent Davis did “go fish,”and it paid off—to the tune of $300,000 for winning the 2018 Forrest Wood Cup, kind of the Lombardi Trophy of bass fishing.

Naturally, Davis’s alma mater was thrilled to welcome him back Oct. 29 to receive a proclamation from the Alabama Legislature, delivered by State Rep. April Weaver, R-Brierfield.

Weaver said that she does have some experience fishing: “And I am not afraid to bait my own hook.”

UM President John Stewart III welcomed the 2009 grad back to campus, and Davis, anticipating the photo op, wore the requisite pro fisherman’s uniform—a jacket adorned with his many sponsors, mainly manufacturers of lures, plus Evinrude and a few others.

Besides being UM’s reigning sports champion, Davis has another claim to campus fame.  He helped to found the college’s fishing team which was the springboard for the nation’s only President’s Outdoor Scholars Program.

Fishing teams are not uncommon among college sports programs, but, for this college without a football team, it is a treat to have bragging rights to a national champion in competitive fishing.

Weaver had had the proclamation matted and framed for the occasion.

“It’s not very often that I have a professional bass winner in my district,” she said. “You continue to be a great example for our young people.”

Davis earned his degree in kinesiology and history because the program he helped to inspire did not launch until two years after he graduated. Nevertheless, Crawford lost no time in reeling in the champ to be a guest lecturer to all 45 outdoor scholars enrollees the day after the presentation.

For Davis, the trips to campus are not exactly a long commute—he lives just over the county line in Chilton County.  Before coming to Montevallo he graduated from Jemison High School.

And, although he puts about 40,000 miles a year on his truck, trailering his boat to FLW (Fishing League Worldwide) fishing tournaments, Chilton County is still home.

“We just built a house,” he said.  His wife, Ashley, also is a UM alum in accounting.

The family property has some small lakes on it, as well as the homes of other family members. “We have our own little community. When my daughter needs babysitting, she hops on her four-wheeler and rides up the hill (to her grandmother’s house).”

Daughter Kayt, 3, recently caught her first fish, but her technique may have a ways to go before she can compete with Daddy. “She wouldn’t touch the fish.” Davis said. For the record, it was a small bluegill.

How do you get from pond fishing in Jemison to capturing a national championship trophy?

Davis credits more than just his own ingenuity and instincts, although those definitely played a part: “People I met here, through the fishing team, they were a big part,” he said.