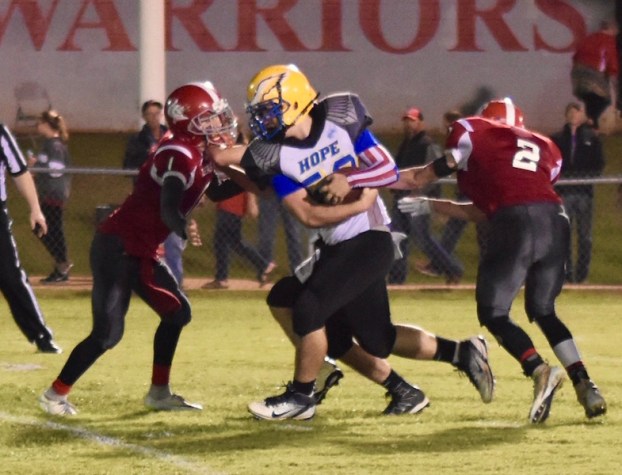 The Hope Christian Eagles finished the season 4-4, which marked their best record since the 2014 football season. (For the Reporter/Anna Ruth Dorris)

Hope has best season since 2014

TUSCALOOSA – A season that began with some unknown and a 1-3 record ended with the Hope Christian Eagles going 3-1 in their final four games to finish the season with an overall record of 4-4.

The Eagles lost their season finale by a final score of 49-36 in a tightly-contested game with Tuscaloosa Christian, but after starting the season without any conference alignment and no postseason to play for, it was an impressive task for this team to not only get up and play, but finish with its best record since the 2014 season.

Hope actually started the game off in impressive fashion, driving the field on its opening possession before Jackson Davis connected with Wesley Holsomback for a 4-yard touchdown to give the Eagles a 7-0 advantage.

They eventually fell behind 21-14, but thanks to a 27-yard connection from Davis to Noah Seiger just before the half, the Eagles were able to take a 22-21 lead into the half.

Coming out of the half, however, Hope struggled offensively in the third quarter, which allowed the Warriors to regain the lead 35-22.

The Eagles weren’t going to go away quietly in their final game of the season though.

The offense came back to life in the final quarter, while the defense was able to also make some plays.

Davis hit Seiger for another touchdown pass, this time from 11 yards out, while Sam Oddo was able to grab an interception to keep the Eagles in striking distance.

After that, the Davis-Seiger combination was reversed as Seiger actually connected with Davis for a 40-yard touchdown pass to narrow the gap.

The excitement continued on the ensuing kickoff as Holsomback was able to execute a beautiful onside kick that was recovered by Seiger.

That was the final bit of good grace for Hope, however, as the Eagles were unable to get any closer before falling by the final score of 49-36.

Running back Evan Key totaled 85 yards during the game on offense.

Defensively, Reese McGee and Key both had strong games on the defensive line, while linebackers Matthew Mair, Davis and Blayton Tierce each had 11 tackles.

Turnovers cost Pelham in tight battle with No. 9 Mustangs