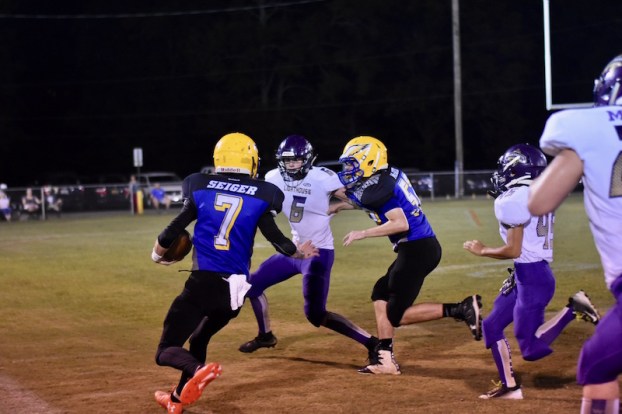 Hope quarterback Noah Seiger looks for running room during the game. Seiger ended the game with several big plays to lead the Eagles to their second win in a row. (Contributed)

ALABASTER – After starting the season with four consecutive road games and a 1-4 record, the Hope Christian Eagles opened play at home last week on Friday, Sept. 14, with a 42-34 win against New Life Christian, and have now won their second consecutive game on their home field with a 42-12 victory against Lighthouse Home School.

With the win, Hope improved to 3-3 on the season with two consecutive wins heading into a bye week on Friday, Sept. 28.

It was an interesting sequence that seized control for the Eagles early in the contest as Wesley Holsomback placed two perfect onside kicks that were both recovered by Hope.

Both drives ended in scores thanks to the offensive ability of quarterback Noah Seiger, who found Jackson Davis for a 40-yard touchdown pass on the first drive and then followed that up by calling his own number for a 60-yard touchdown run on Hope’s next offensive drive after recovering the second onside kick.

That 14-0 lead was really all the Eagles needed thanks to dominant play up front on the defensive line from Reece McGee, Evan Key and Blayton Tierce throughout the game. At one point, McGee was able to sack the Lighthouse quarterback in the end zone for a safety in the second quarter.

Matthew Mair also had a solid night defensively for the Eagles and led the team in tackles.

With the strong play on the defensive side of the ball, that freed up the offense to be aggressive and take chances, which they did on several occasions in the first half.

Seiger also continued strong play with another long touchdown run, this time for 35 yards. The final touchdown for the Eagles came on a 7-yard run from Sam Oddo.

A big reason for the dominance on offense was the strong play of the offensive line featuring Willie Wade, Wayne Connley and Jacob Dorris.

GAME OF THE YEAR: Pelham gets wild 46-42 win over Chelsea