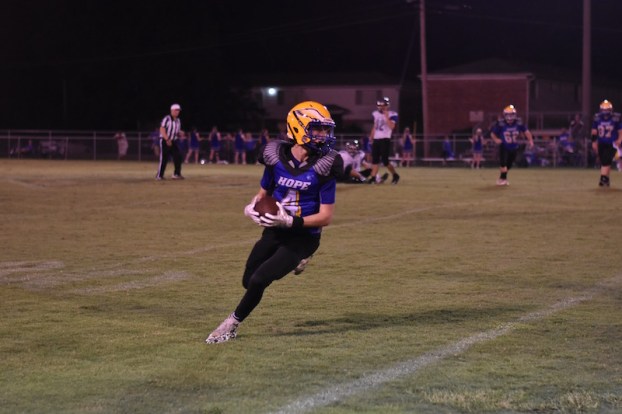 The Hope Christian Eagles solved New Life on Friday, Sept. 14, to hand them their first loss of the season, while the Eagles picked up their second win of the year. (Contributed)

ALABASTER – After three consecutive losses following a win to start the 2018 football season, the Hope Christian Eagles got back into the win column on Friday, Sept. 14, with 42-34 victory in their home opener to hand New Life Christian its first loss of the season.

Even in those three consecutive losses by the Eagles, they were showing positive signs, especially on the offensive side of the ball, scoring 48, 54 and 20 points and losing by no more than 20 points.

Seeing that they were able to compete in games, the Eagles took advantage of a bye week last week to fine tune some different aspects of the game to be ready for their home opener.

It paid off, especially early, against the visiting Eagles.

In the first half alone, Hope Christian scored as many points as it did in its first win of the season, a 28-6 victory against Chilton Christian, and eight more points than it did in its last game, a 38-20 loss to Victory Christian, by putting up 28 first-half points against New Life.

The scoring in that first half featured three rushing touchdowns from senior standout running back Jackson Davis, who continues to impress with his talented play.

Davis was also responsible for the fourth touchdown in the first half with a touchdown pass to Jacob Dorris.

With Davis helping the Hope offense light up the scoreboard early and the defense playing stout, the Eagles were able to take a 28-8 lead into the halftime break.

In the second half, New Life started to look much more like the team that came into the game with a 3-0 record not having given up more than 24 points in a game as the Eagles tried to pull off a massive comeback.

While they were able to score 26 points in the second half, Hope was able to tack on 14 more points thanks to a rushing touchdown from Noah Seiger and a kickoff return for a touchdown by Davis.

Seiger also had a key interception late that really sealed the win for Hope Christian.

It was a strong night for Davis, who ended the game with five total touchdowns in the win. He helped spark an offense that solved a New Life defense that was playing lights out through the first three games. It led to the Eagles posting 412 yards of total offense.

Defensively, Davis posted 12 tackles to lead the team on that side of the ball too, while Wesley Holsomback had eight tackles, Blayton Tierce had six tackles and Seiger had five tackles.

Pelham falters in second half in home loss to Minor

By GRAHAM BROOKS / Staff Writer PELHAM – It was a night of missed opportunities and struggles offensively, specifically in... read more