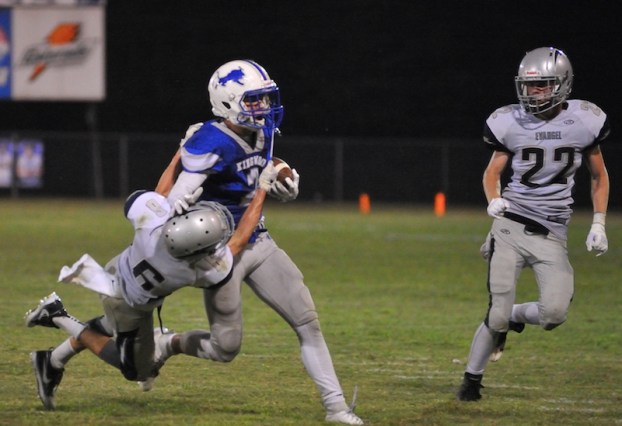 Kingwood will look to move to 3-0 this Friday night with its second straight victory against a county opponent. (For the Reporter/Larry Dancy)

A look at Week 3 in the AISA and ACSC

With two weeks of action already in the books for our AISA and ACSC teams, teams are starting to show us what to expect throughout the 2018 football season.

One team, the Kingwood Lions, has been on fire, while Coosa Valley, Cornerstone and Evangel all sit at 1-1 and Hope Christian sits at 1-2. With Week 3 kicking off tomorrow night, we’ll have a chance to see three teams above .500 and all four at .500 or better. Below we pick each of the four games taking place this week.

I have picked against Kingwood the first two weeks of the season, but they have put me in my place jumping out to a 2-0 start with wins against Pickens Academy and most recently Evangel.

Both of those teams had strong offenses a season ago, and Evangel has an extremely talented offense this season as well. Neither has been a problem for the Lions’ defense who has given up just six combined points through the first two weeks.

Coosa Valley, on the other hand, has been struggling slightly on offense this season, but seems to have gained some momentum last week with a 22-17 victory against Pickens Academy.

While the Rebles will continue to gain momentum throughout the season, this Kingwood team is playing unbelievable right now and I can’t go against them for a third week in a row. Kingwood 27, Coosa Valley 14

After opening the season with a dominating 42-10 victory against Sparta Academy, the Cornerstone Chargers took a step back last week with a 42-10 loss to Springwood on the road.

This is an important game for the Chargers momentum wise as they head into a matchup with region opponent Chambers Academy the week after. Crenshaw sits at 1-1 on the season right now coming off a loss of its own.

It’ll be a tight road game for the Chargers, but I expect them to pull off a bounce-back win, as long as the defense gets back to its opening-game ways. Cornerstone 24, Crenshaw 20

The Evangel Lightning are coming off just their second loss in the last 12 games after Kingwood pulled off a 28-6 win against the Lightning last week.

They’ll now hit the road for the second consecutive week to take on Lowndes Academy, who is coming off a 39-0 shutout of Sparta Academy to start the season last week.

I think head coach Tim Smith will have his guys ready to bounce back, especially with them being just as good or better than Lowndes, which should lead to success this week. Evangel 28, Lowndes 20

After its 1-0 start to the season, the Hope Christian Eagles have back-tracked slightly with two straight losses, but the offense continues to put up points despite the struggles.

Both losses the last two weeks have been by 18 and 20 points to East Memorial and Tabernacle, respectively, but the offense has also put up 48 and 54 points in those games.

Should the defense step up and match the offense, this team will be successful, but it’s tough to keep the energy level high with every player playing both sides of the ball.

This week they get a Victory Christian team from Mississippi that is coming off a 67-38 win against North River Christian. I expect to see a similar outcome as the last two weeks, but wouldn’t be surprised by a win from the Eagles at the same time. Hope 42, Victory Christian 56

By GRAHAM BROOKS / Staff Writer HOOVER – After a strong showing in the Oak Mountain High School tournament that... read more