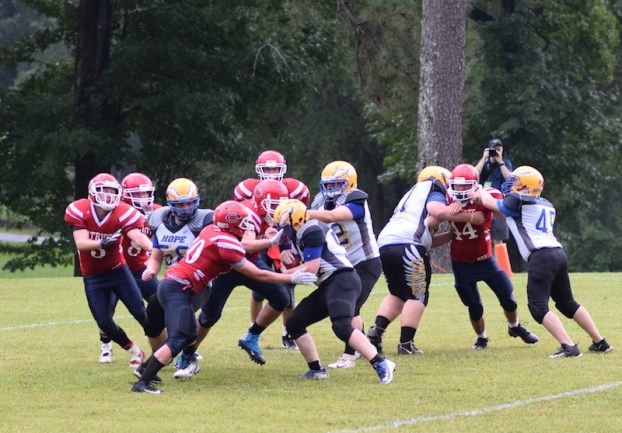 The Hope Christian Eagles started the 2018 football season 1-0 thanks to some impressive playmaking on both sides of the ball, including eight points scored by the defense. (Contributed)

JEMISON – For the second consecutive year, the Hope Christian Eagles are off to a 1-0 start after taking down Chilton Christian Academy in a six-man road football game on Thursday, Aug. 9, by a final score of 28-6.

It was a statement start for a team that only has right around 15 players on its roster this season, meaning everybody on the team is playing the majority of the game on both sides of the ball.

While the Eagles, competed in the ACSC conference last season, an eight-man football league, they didn’t have enough players to do so this year, so they scheduled a mixed bag of opponents.

That started with Hope’s only six-man game of the season against Chilton Christian, and the Eagles couldn’t have asked for a better start.

At times last season, the offense flashed some impressive skills, and it did so again in the opening quarter of their first game.

There wasn’t much first-half action, but quarterback Jackson Davis was able to connect with Noah Seiger for a 55-yard touchdown to put the Eagles on top 7-0 in the opening quarter.

Later on in the half, the defense stepped up and showed it wanted to match up to the offenses fast start when Matthew Mair tackled a Chilton ball carrier in the end zone for a safety to put the Eagles on top 9-0.

That was all of the first-half scoring, but it was an impressive start for the Eagles, who paired their defense and offense perfectly.

At the halftime break, head coach Matt Davis wanted to make sure his offense was ready to go in the second half now that the team was warmed up and had gained some confidence.

Coming out in the second half of the game, that was evident with a strong showing on that side of the ball.

Noah Douglas was able to add the first score of the third quarter when he carried the ball from 20 yards out all the way to the end zone after a shifty run by several defenders.

Then, just like the first half, the defense decided it wanted to score some points as well when Jackson Davis made another big play by taking an interception all the way to the house for a pick-six.

Hope continued to pour it on shortly after thanks to another touchdown pass, this time from a different quarterback. Seiger, who caught the first touchdown of the game, tossed one this time when he connected with Jackson Gilbert for a 10-yard score.

That was all of the scoring for the Eagles were able to accomplish in the game, but with a 28-0 lead, they had all of the cushion they needed to pull out the win.

Hope’s defense scored eight of those 28 points, and held Chilton to just two first downs in the game, both of which came in the fourth quarter as they gave up six late points.

Jackson Davis was not only responsible for two touchdowns, but also blocked two punts in the victory.

It was a strong performance on both sides of the ball for the Eagles, who will now travel to East Memorial on Friday, Aug. 17, for their second road game in a row to start the season.