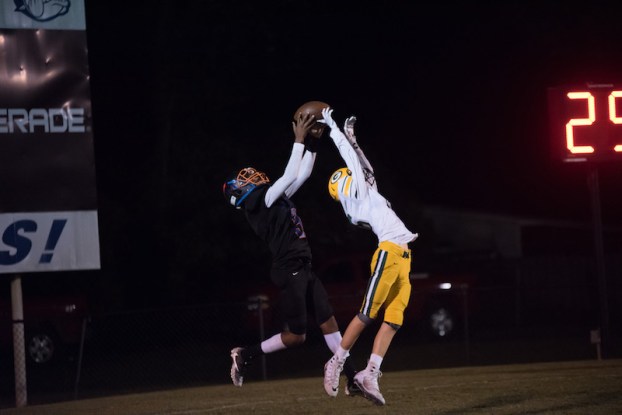 Montevallo got the opportunity to see its 2018 football team for the first time in two spring games against Munford and Pell City. (File)

Montevallo gets experience in spring game

MUNFORD – Last year, the Montevallo Bulldogs football team was riddled with injuries, which led to a difficult season for the Bulldogs, but it also allowed for several young athletes to step into starting roles and gain valuable experience.

On Friday, May 18, Montevallo got the chance to see a lot of those players back in action in two different spring games against Munford and Pell City, as the Bulldogs looked to preview their 2018 team.

“I was very proud of our guys in the way that they competed and kept battling in both contests,” head coach Brandon Wilcox said. “I told them before the game started that we would not win the state championship or lose it today, but that we would be setting the tone for what this team is about.”

With the starters playing one half of football in both spring games, Montevallo’s starters took down Munford’s starters 12-7, while the Bulldogs tied with Pell City 6-6 in the first half.

In the first game against Munford, the Bulldogs fell behind early after a fumble recovery was returned 39 yards for a touchdown.

The defense, however, stood tall the rest of the game, something that became a trend throughout the night, and didn’t give up a point throughout the game.

On Montevallo’s ensuing possession, Deon Gilliland scored from 3 yards out to bring the Bulldogs within a point at 7-6.

After another defensive stand, Montevallo was able to go on a late drive to close out the first quarter. The Bulldogs eventually got to the 35-yard line with 26 seconds remaining in the quarter when quarterback Malik Inabinette found a leaping J.J. Evans for a touchdown to put the Bulldogs on top 12-7.

That was all of the scoring necessary in the first half for Montevallo, as the defense led the team to a 12-7 lead at the break before both teams pulled their starters.

The second game started in similar fashion for the Bulldogs.

Pell City was able to drive down the field on the first possession of the game before eventually punching in a 2-yard touchdown run to take a 6-0 lead.

The rest of the quarter was quiet in the scoring column. Despite several good drives by both teams, each one ended in a punt.

Montevallo erased the 6-0 deficit in the second quarter when Dakotah Ross was able to catch a 6-yard screen pass from Inabinette to tie the game 6-6. The Bulldogs attempted a 2-point conversion, but it was unsuccessful, which led to a 6-6 tie at the end of the first quarter before the starters were replaced.

For the day, Inabinette was 16-for-23 passing with 224 yards and two touchdowns, while Evans caught nine passes for 149 yards and one touchdown as he is expected to have a big junior season.

Avery Anfield added four catches for 49 yards, while Gilliland had nine rush attempts for 31 yards and a touchdown.

“I thought our guys did a good job of setting us up for a great summer,” Wilcox said. “Now we just have to get tougher, in better shape, and bond as a team.”

It’ll be interesting to see how the Bulldogs handle moving up from Class 3A to Class 4A, but the team has a lot of positives to build off of heading into the summer.