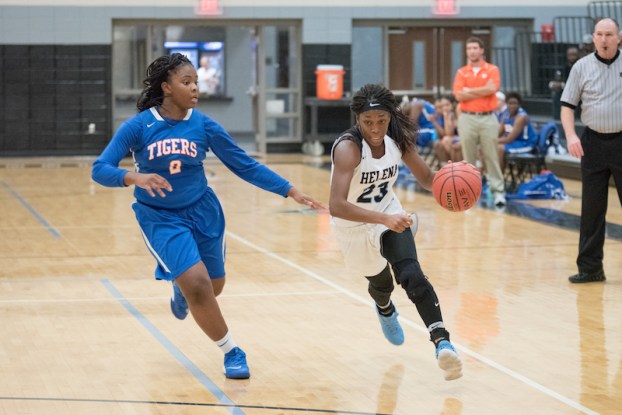 Helena’s Jordan Jones (23) finished with 21 points to lead the Huskies to a 65-48 win over Chilton County on Dec. 14. (Reporter Photo/Keith McCoy)

Three score in double-figures as Helena takes down Chilton County

HELENA–The Helena Huskies girls basketball team had three players finish in double-figures and outscored the Chilton County Tigers in three of four quarters on its way to a 65-48 win on Thursday, Dec. 14 at Helena High School.

The Huskies were led by seniors Jordan Jones and Brandis Lang who combined for 37 of the Huskies 65 points in the game. Jones finished with 21 points to lead all scorers while Lang finished as the second-leading scorer with 16 points.

The Huskies led 30-27 at halftime but stretched the lead in the second half by outscoring the Tigers 35-21 to close out the game with ease.

Another player that played a key role for Helena was Chloe Van Kovering who finished with 11 points in the contest.

Helena shot 43 percent from the field and made eight 3-pointers while forcing 17 steals in the win.

Helena head coach Alan Skinner said the key to the game was containing Chilton County’s Kiara Steele who lit up the scoreboard the first time the two teams met.

“We played them once already and kind of knew what they wanted to do,” Skinner said. “They have one girl who’s tough to handle and is a matchup problem for us. She had eight points against us tonight but last time we played them she had 25 points.”

The Tigers leading scorer was Jasmine Martin who finished with 13 points but it was not enough to lead Chilton County to a win. Skinner said cutting down on the turnovers was another important factor in the game.

Helena bounces back from loss to notch tenth win of season

By GRAHAM BROOKS / Staff Writer HELENA–After suffering its first loss of the season on the road against McAdory on... read more