COLUMBIANA – A Blountsville man who was arrested and charged with multiple sex crimes against three underage victims in Shelby County earlier this year was indicted by a grand jury during its November session.

Tyler Marc Bynum, 29, who lists an address on Black Road, was arrested and charged with three counts of transmitting obscene matter to children on Jan. 23. 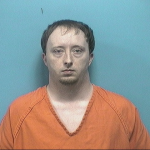 According to court documents, Bynum was arrested after he allegedly sent photos of his genitalia “by means of a computer communication system” to victims who were younger than 16 years old on three separate occasions “for the purpose of initiating or engaging in sexual acts” in December 2016. His indictment stated that the explicit pictures depicted “actual or simulated nudity, sexual conduct or sadomasochistic abuse to a child.”

Transmitting obscene matter to children is considered a Class B felony. Bynum could face two to 20 years if he is convicted.

Bynum was released from the Shelby County Jail on bonds totaling $90,000 the day after he was arrested.

Bynum’s case was assigned to Shelby County District Court Judge Daniel A. Crowson shortly after he was charged. His case was bound over to a grand jury on July 19.

By GRAHAM BROOKS / Staff Writer HELENA–Girls within the Helena Belles organization had the opportunity to throw on some jerseys... read more