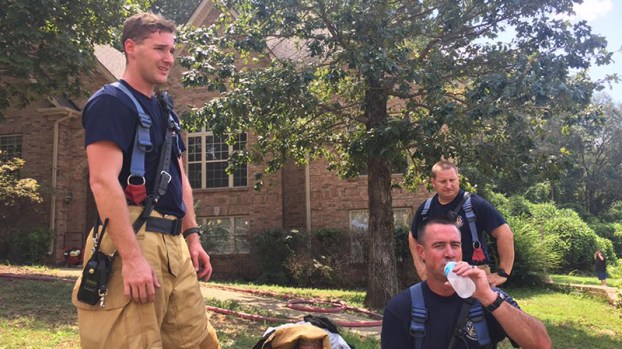 Alabaster firefighters cool down after battling a fire in the 100 block of Timber Ridge Road in Alabaster on Sunday, Aug. 20. No injuries were reported in the incident. (Contributed/Alabaster Fire Department)

ALABASTER – A Sunday afternoon fire at a residence in the 100 block of Timber Ridge Road caused heavy damage to the home’s kitchen, but working smoke alarms prevented heavier damage and injuries, according to Alabaster’s fire chief.

The AFD received the call reporting the residential blaze at 11:42 a.m. on Sunday, Aug. 20, and discovered heavy smoke pouring from the home’s front door when they arrived on scene, said Fire Chief Jim Golden.

“There was a well-involved fire in the kitchen,” Golden said, noting one team of firefighters began battling the fire while another team searched the house to ensure nobody was trapped inside. “It was determined that everyone had safely evacuated the house before we arrived on the scene.”

Golden said firefighters were able to quickly contain the fire in the kitchen, where it started, and extinguish it before it could spread to other areas of the house.

After the blaze was extinguished, firefighters determined the fire likely started when a cardboard box accidentally came into contact with a stove eye, Golden said. In total, AFD was on the scene for about an hour-and-a-half.

There was only one person in the home when the fire started, and was able to evacuate the structure quickly because the home had working smoke alarms.

To request a free smoke alarm, visit Cityofalabaster.com/201/Smoke-Alarm-Request-Form or call the department at 621-8752.