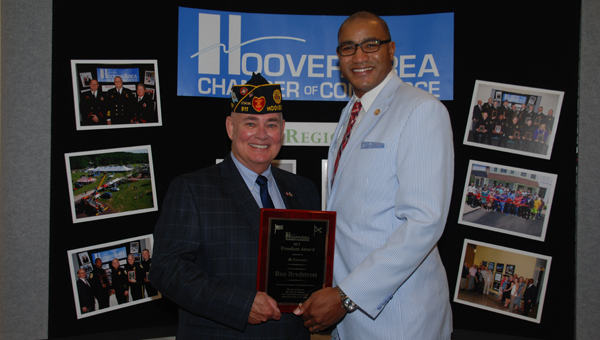 HOOVER – Ron Bradstreet, commander of American Legion Ryan Winslow Post 911 in Hoover, was named the recipient of the 2017 Freedom Award.

The award, which was started in 2003 with the intention of recognizing Hoover’s most outstanding public servants who have dedicated themselves to the ideals of freedom, was announced at the Hoover Area Chamber of Commerce luncheon on Thursday, July 20, at the Hoover Country Club.

Bradstreet served two tours of duty in the Vietnam War and set up the American Legion Post, which has grown from about 50 to 200 members in a couple of years, among his many distinctions.

Bradstreet thanked the veterans in attendance and talked about Americans working together to improve communities and the country.

“This is not about me; this is about we as Americans,” he said.

Mark Davis, recipient of the 2016 award, and Paul Pocopanni, chairman of the Hoover Veterans Committee, both spoke before Bradstreet.

Pocopanni said the idea that “freedom is not free” was illustrated by the recent crash of a military transport plane in Mississippi that claimed the lives of 16 service members.

“Me being from a flying background, it really struck me hard when I heard about it,” he said.

Regions Bank sponsored the luncheon and the Freedom Award, which was presented by Mayor Frank Brocato.

The award recipient is chosen by the Veterans Committee. According to the award guidelines, applicants must:

•Be a role model in the Hoover community—of good character and reputation in the community.

•Have shown support for local, state and federal government.

•Have promoted the ideals of freedom through this support.

•Have given long-term service to these ideals, not just a one-time effort.

•Have supported the U.S. military through either support to, or service in the military.

FROM STAFF REPORTS NORTH SHELBY – Adults and children coping with divorce can find hope and encouragement at DivorceCare, a... read more