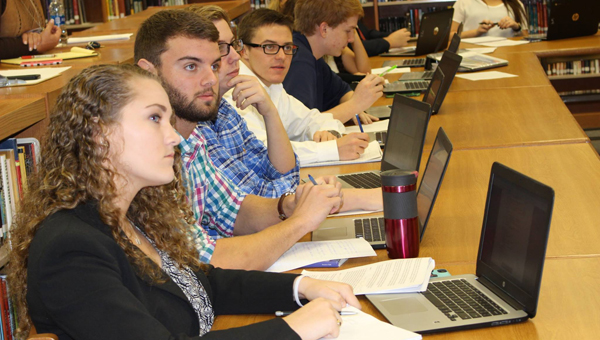 Much has changed from 1776 to 2017, but local history teachers make sure the importance and ideals of our country’s founding are not lost on today’s youth.

Susan Schwartz’s AP government course for Oak Mountain High School seniors revolves around the framing of the Constitution, including the discarded Articles of Confederation.

“What most people forget is the first attempt at a government was a failure,” Schwartz said. “We have to talk about the fact that at first we didn’t get it just right, but what’s great about our country was we were able to pick ourselves up without any fighting and put together a document that has only been changed 26 times through history.”

The Founding Fathers developed a Constitution that has been amended relatively little in 241 years and allowed the United States to flourish into the most powerful country in the world.

Schwartz and other local teachers, such as Thompson Middle School seventh grade pre-AP civics teacher Andrea Fordham, use creative approaches to instruction about our country’s founding.

After discussing the American Revolution, Fordham’s classes study the three branches of government—legislative, executive and judicial.

The students are split into groups and tasked with working together to create a babysitters club or dog walking club, for example.

“We relate it back to how the Founding Fathers had to work together to come up with the Constitution,” Fordham said. “Every person had a purpose, and if they didn’t work together, we wouldn’t have what we have today. You need to relate it to their everyday life.”

Fordham’s students also participate in an election project to help understand the process in the United States, including researching and debating various issues including health care, taxes and education.

“I was impressed by how they did,” Fordham said.

John Croom has taught several different history classes to sixth graders through high school seniors. He currently teaches AP world history and AP European history at OMHS, so his instruction about the American Revolution is from the European perspective.

Croom said his efforts are focused on helping the students understand the historical significance of the events.

“You can know the dates, but that’s just rope memorization,” Croom said. “It’s like the Pledge of Allegiance: Everybody knows it, but do you stop and think about what you’re saying? You’ve got to capture the moment for these students to make it come alive for them. You have to make each new generation rediscover what is so important about this.

“Men put their lives and fortunes on the line to break away from the greatest superpower on the earth. We’re not the same country we were in 1776, but we have to hold onto that foundation.”

Once students understand our country’s history, they can see the ideals it was founded upon at work to this day.

“Even as polarized as our government is right now, we are still proving that the Constitution works,” Schwartz said. “We are seeing it today. Even as ideas change, and our world changes, that document that was founded all those years ago is still a living, breathing, working document, and every person works under it every day whether they know it or not.

“We are so blessed to live in the United States, that we don’t have to think every day about how we are interacting with our government. Sometimes I wish students could visit other places so they could understand how awesome it is here.”