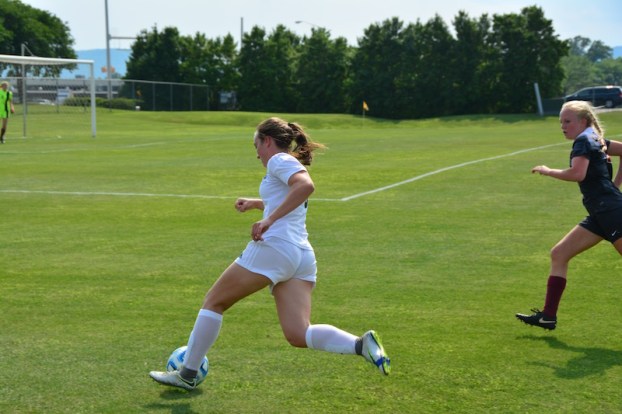 Sarah Adcock breaks away from the defender early in the game with Faith Academy. She went on to have four goals as the Lions took down the Rams 6-1 to advance to the state championship game. (Reporter photo/Alec Etheredge)

HUNTSVILLE – If it sounds like a broken record, that’s because it is. Sarah Adcock’s impressive four-goal performance helped lift the Briarwood Lions to a rather easy 6-1 win over Faith Academy in the semifinals of the 4A/5A girls soccer playoffs.

Sarah and her twin sister Maggi Adcock were responsible for five of the Lions’ six goals in the game as their offense continued to shine like it has all season long.

“That was exciting to see,” Lions head coach Ryan Leib said. “We have a pretty potent offense and had plenty of chances that we weren’t finishing for a while. Sarah has been doing that for a while and it wasn’t a shock.”

While Briarwood dominated the entire game and Sarah scored her first goal just 3:11 in, it was somewhat of a slow start for the Lions in the first half because of the many great looks they had.

After hitting the post on one occasion and getting the ball in the goalie box on several occasions, Maggie finally converted on a good look when she fired the ball into the back of the net with 8:11 left in the half to give her team a 2-0 advantage heading into the break.

“We played really well in the first half and had a lot of chances, but just didn’t finish them,”Leib said.

Whatever he said at the half clearly paid off as the Lions came out and converted on several chances in the second half, which is when the real Briarwood team that we’ve seen all season showed up.

Within 18 seconds of the second half starting Sarah showed why she is such an elite player grabbing her second goal of the half to give the Lions a strong 3-0 lead.

“Getting that goal right at the beginning of the second half really gave us a big boast,” Leib said. “The goals came in waves after that.”

Several tsunamis was more like it as Briarwood went on to add two more goals in the next six minutes to give them an insurmountable lead of 5-0. Sarah picked up her hat trick with the second goal of the half with 35:00 left, while Grace Harris was able to drive one off the right post and into the goal just 2:16 later.

Sarah completed her four-goal game with 26:45 left to play as she broke away yet again up the left side of the field and fired the ball all the way to the opposite side of the net to give Briarwood a 6-0 lead.

Gracie East would end the shutout with seven minutes remaining as she put a beautiful bending shot from 30 yards out into the back of the net to cut the lead to 6-1, which became the final score seven minutes later.

Briarwood will take on St. John Paul II in the championship game tomorrow at 5 p.m. as they look to bring home the blue map.

“We just need to get in the right mindset to go out there and compete and fight hard and do the simple things we have done all year,” Leib said. “It’s 80 more minutes.”

By ALEC ETHEREDGE | Sports Editor HUNTSVILLE – It was a game dominated by the Briarwood Lions, but the low... read more