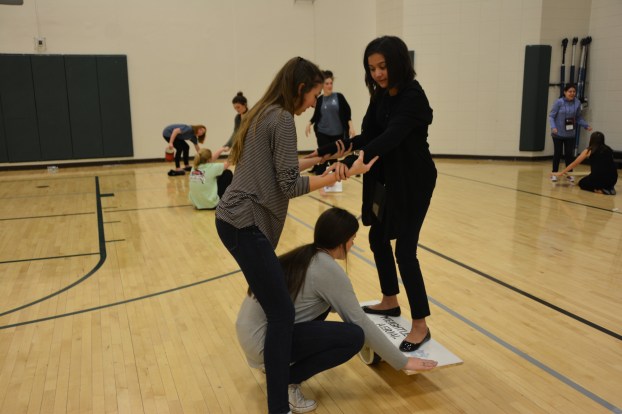 Students participating in an Introduction to Circus workshop learn how to perform balancing themselves on a Rola Bola. (Reporter photo/Briana Harris)

PELHAM – Hundreds of high school thespians from across the state converged at Pelham High School from Feb. 24-25 for the Alabama Thespians Festival hosted by the Alabama Educational Theatre Association (ALEdTA).

Troy Taylor, Alabama chapter director for the ALEdTA, said the festival brings together students and teachers throughout Alabama for two days of workshops, performances and auditions.

Taylor said 800-850 students from 45 different schools and about 80 teachers participated in the festival. Guest artists from throughout the United States, college professors and Alabama teachers hosted the workshops, which also included professional development for teachers.

Students also had a chance to audition for $1,000 scholarships given by the ALEdTA to be used toward a theater major at any college in the United States, said PHS theater teacher Jamie Stephenson.

For auditions, students performed a 90-second monologue or a musical, technical theater or theater education piece. Four scholarships were awarded.

In addition to bringing together students and teachers from across the state, Stephenson said the festival also raises awareness for fine arts programs in schools.

“Seventy percent of schools in Alabama don’t have a fine arts program,” she said.

Andy Meadows, arts education specialist for the Alabama Department of Education, said the arts are important because it has the ability to help create well-rounded adults.

“Artists are always trying to improve and evolve,” Meadows said. “You can instill that work ethic and thought process in a person through the arts. Collaboration, critical thinking, innovation and problem solving skills can all be learned through the arts.”

PHS senior Riley Taylor, who also won Miss PHS, served at the festival as a Student Thespian Officer for the ALEdTA. Her role was to help make sure the festival ran smoothly and provide help to other students when needed.

During the festival she had an opportunity to audition for a scholarship.

“This is my third year being a part of the festival and it is so much fun,” she said. “I love being an STO and I’m sad it’s my last year, but I’m glad I’ve gotten a chance to meet new people and bond with other STOs.”

PELHAM – The city’s Bearden Road sidewalk project is moving along and is expected to be completed in three to... read more