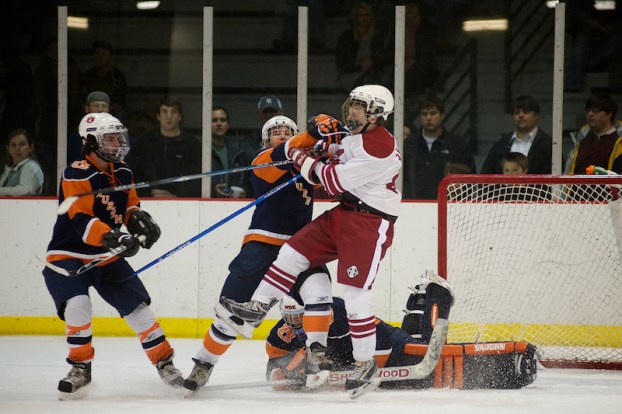 After playing the first half of their season in the Pelham Civic Complex's practice rink, Alabama will host Auburn on the main rink in the Iron Bowl of hockey this weekend. (File)

PELHAM, Ala. – The Pelham Civic Complex has confirmed that the seventh annual Iron Cup will be played on the facility’s newly-repaired main rink this weekend. This returns Alabama Hockey’s seating capacity to 3,500 ahead of the most popular game of the year. The first half of the season saw the team limited to the practice rink with a maximum capacity of 500.

The series will kick off Friday night at 8 p.m. and will conclude Saturday night with puck drop scheduled for 7 p.m.

Fans are encouraged to purchase their tickets in advance as the Alabama-Auburn rivalry has historically drawn sellout crowds. Media members should submit credential requests to Brian Ogden, director of media relations, at least 24 hours in advance.

The larger rink will accommodate the increased attendance brought by the nature of the team’s opponent and the addition of Jermaine “Funnymaine” Johnson. Funnymaine, famous for his “How Bama Fans Watched…” videos, will be serving as the team’s Social Media Captain at the game.

This is the first game of the team’s new Social Media Captain program. Social Media Captains will tweet and post live about their experience at the game from their own social media accounts while being given a personalized jersey, meeting the team and dropping the ceremonial puck before the game. Head coach John Bierchen encourages fans to interact with the Captain using the hashtag #tidesocial.

Alabama is 17-0 all-time against Auburn and has had a player take home Iron Cup MVP honors each year the series has been played.

From Staff Reports PELHAM, Ala. – Alabama Hockey will host three special event nights at games in the spring semester. The... read more