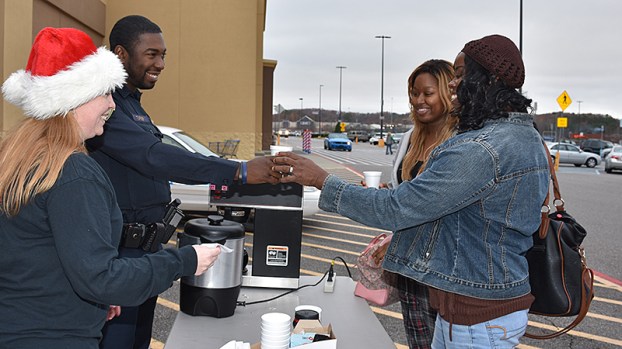 Members of the Alabaster Police Department have set up a mobile command center to share warm holiday beverages with shoppers at the Propst Promenade. Individuals can stop by the command post, located in front of the Promenade’s Walmart. (Contributed)

By EMILY REED / Special to the Reporter

ALABASTER – While beefing up security at Alabaster’s largest shopping center this Christmas season, members of the Alabaster Police Department are also continuing a tradition of sharing Christmas cheer.

For the second year, shoppers visiting the Propst Promenade shopping center during the weeks leading up to Christmas will have a chance to stop by the department’s mobile command center and mingle with police officers and dispatchers while enjoying warm holiday beverages.

“We want to be able to maintain a positive relationship with the community that we serve,” said Community Relations Officer John St. Pierre. “We encourage people to come by and see us while they are out doing there shopping.”

Individuals can stop by the command post, located in front of the Promenade’s Walmart   Monday-Friday from 4-8 p.m. and Saturday and Sunday from 11 a.m. until 8 p.m. and enjoy free hot cocoa and coffee while meeting members of the Alabaster Police Department.

While the command post is manned at all times, the warm beverages are only served weather permitting.

“We love interacting with people who stop by,” St. Pierre said. “A lot of kids will come by and want their pictures taken with us, and the opportunity to meet us and we just enjoy getting to interact with the community. For some of us out patrolling, the days can become really long, but the minute you see a kid come up and give you high five is just an incredible feeling.”

The department has increased its presence at both the Propst Promenade and South Promenade shopping centers by 300 percent during the Christmas season.

St. Pierre said the beefed up presence consists of uniformed and non-uniformed officers in vehicles and on-foot.

So far, St. Pierre said the response from the community has been positive to the increased police presence.

“We have received feedback from people that they feel safer while they are out doing their Christmas shopping knowing there is an increase in police,” St. Pierre said. “Our goal is to work as a team with the citizen’s so if they see or hear something going on, we hope they stop and let us know. It is all about collaborating to solve problems within the community and have an open line of communication.”

Rigney organized a similar program called “Coffee with a Cop” that garnered positive feedback from the community.

St. Pierre said the Alabaster Public Servants Foundation has been instrumental in helping the department with the command center by providing marshmallows and candy canes.

“We have such an amazing support system in Alabaster, and we love being able to interact with everyone,” St. Pierre said.