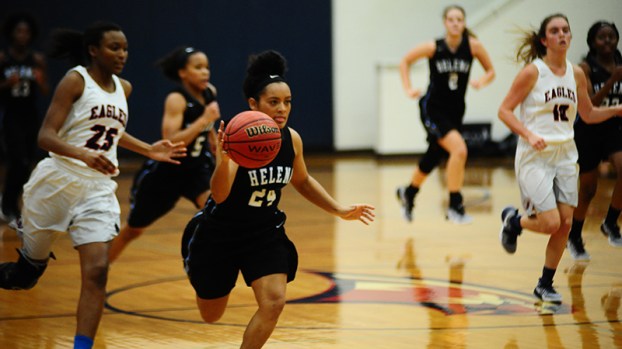 Led by Jordan Jones’ 24 points in the game, Helena held a comfortable 39-30 lead heading into the final quarter.

Oak Mountain climbed back into the game with hot outside shooting. The Lady Eagles were led by Jacoby Sims five three-pointers in the game, two of which came in the fourth quarter. Sims finished with 17 points.

Trailing 51-48 with one final chance, the Lady Eagles needed a big shot to send the game to overtime and they got just that.

Belle drained a three-pointer to tie the game at 51 with 11.7 seconds left and Helena could not score on the other end and the game went to overtime.

In overtime, Helena got big baskets from Jones and clutch free throws by Morgan Watkins and an intentional foul by Oak Mountain late in overtime helped seal the win for the Lady Huskies.

“I’m really proud of the fight in my girls tonight,” said Helena head coach Alan Skinner. “We played poorly in a losing effort last night, had a pretty intense pregame walk through today after school, and a pretty tough film session today They could have had their mind in a thousand different places but gutted out a big, bounce-back win. Coach McGowan is a good coach and does a lot of things that are hard to defend, and a lot of major discipline on defense. We were able to make plays and turn defense into offense late in the game and in overtime, which really sealed it for us.”

Mary Elizabeth Laatsch added 12 points for Helena and Cassady Greenwood was the leading scorer for Oak Mountain finishing with 20 points.

By GRAHAM BROOKS / Staff Writer NORTH SHELBY–In a game where points were hard to come by and strong defensive... read more