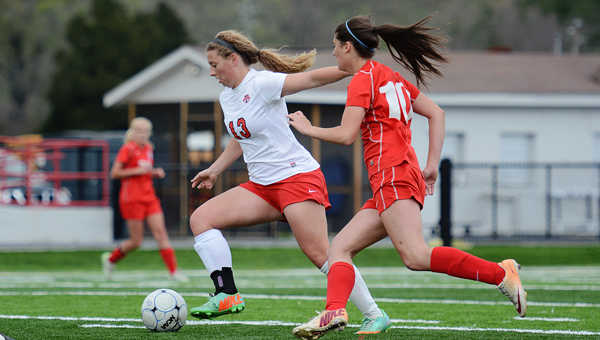 Mariah Poe and the Thompson Lady Warriors got the best of Vestavia in their first meeting on March 27, but lost to the Lady Rebels in the first round of the 7A playoffs on April 28. Thompson ended the season with a 19-5-0 record. (Contributed / Troya Yoder)

VESTAVIA HILLS – The only time the fourth-ranked Lady Warriors from Thompson faced off against the second-ranked Lady Rebels of Vestavia Hills, Thompson won by a final score of 1-0. The first encounter took place on March 27 and was on Thompson’s home turf. More was at stake in the second meeting, however, as the two teams met in the first round of the inaugural 7A state tournament.

Thompson came into the game with a 19-4-0 record. The four losses all came against teams currently ranked in the top five of the state in class 7A. One loss came at the hands of Auburn, one against Mountain Brook and two against Oak Mountain. In the 19 games Thompson won in the regular season, the Lady Warriors outscored opponents 99 to 6, which works out to an average score of 5.2 goals for and .3 goals against per game. In the four games Thompson lost, the Lady Warriors were outscored 12-2, although six of those goals were scored in the Auburn game. Generally, when the Lady Warriors have lost, they have lost big.

Unfortunately for Thompson, the April 28 meeting with the Lady Rebels was another such occurrence. The Lady Warriors came out flat, and lost to Vestavia 4-1 to end their season.

Thompson ended its season with a 19-5-0 record and a second-place finish in the competitive Area 5.

By BAKER ELLIS / Sports Editor The following is a comprehensive list, by classification, of all Shelby County athletes who... read more