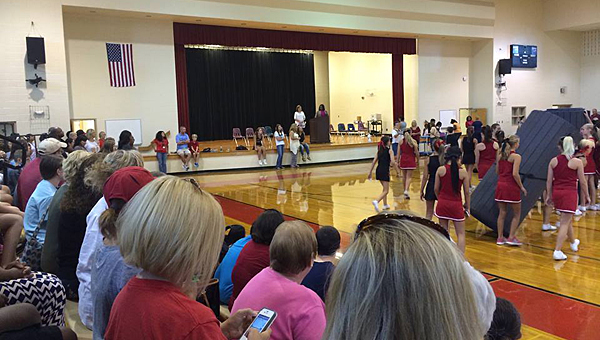 Thompson Middle School soon will get a new retractable curtain in its gym. (Contributed)

ALABASTER – Thompson Middle School soon will be able to easily hold two sporting events at the same time in its gym after the city’s Board of Education agreed to purchase a large retractable curtain for the facility.

The School Board voted unanimously during its Feb. 9 meeting to spend about $15,000 to purchase the large curtain from Covington Flooring. The curtain, which will be motorized, will hang over the center of the gym floor.

Alabaster School Superintendent Dr. Wayne Vickers said the retractable curtain was proposed by Volkert engineering after the company completed an assessment of all school buildings in 2013 and made recommendations for the facilities.

Vickers said the school system previously moved forward with modifying the basketball goal lines in the gym to allow for two half-court games to take place simultaneously, and said the new curtain will make it easier for two events to take place at the same time.

“With the curtain, the events won’t interfere with each other,” Vickers said. “We felt now was the right time to move forward with that project.”

The curtain likely will be installed within the next month, Vickers said.

A calendar for the 2015-2015 academic year was proposed during a Feb. 9 Hoover Board of Education meeting. (File) By... read more