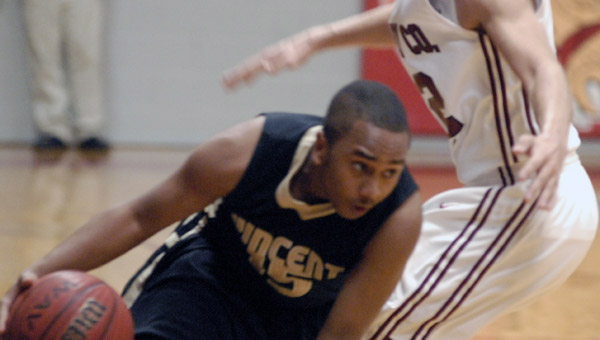 Vincent split a pair of games with Westminster at Oak Mountain and Altamont on Jan. 26 and 27, bringing them to 18-8 on the year. (File)

VINCENT- The Vincent Yellow Jackets boys’ basketball team is in the midst of finishing up an impressive regular season campaign, and split a pair of games against Westminster at Oak Mountain and Altamont on back-to-back nights on Jan. 26 and 27.

Vincent, which wrapped up area play with a perfect 4-0 record against Thorsby on Jan. 22, currently stands at 18-8 and will host the 2A area 9 tournament beginning on Feb. 5.

Against Westminster the Yellow Jackets got big production from seniors Jace Greene and Jacorey Roper, as well as junior Wesley King. Greene finished the contest with 12 points, 11 rebounds, two assists and two steals to cap off a well-rounded performance. Roper was the lead producer on the evening, finishing with 15 points and 10 rebounds to finish with a double-double. The game was never really in doubt for Vincent, as they would go on to win by a score of 54-35.

The following night against Altamont, the Yellow Jackets were feeling the fatigue that two nights of action brings with it. Vincent was held to just six first-half points while Altamont opened up a 25-6 halftime advantage. They would attempt to mount a second-half comeback, pulling the score to 32-19 going into the fourth, but Altamont was able to secure the win on Vincent’s home floor by a final score of 44-31. Vec Hamilton led the way for the Yellow Jackets on this night with 14 points and three steals.

Vincent will play at Sylacauga on Jan. 29 before finishing the season with a game at Childersburg on Feb. 2, then all eyes will turn to the area tournament.

The Westminster School at Oak Mountain will field the first volleyball team in school history in fall of 2014. The... read more