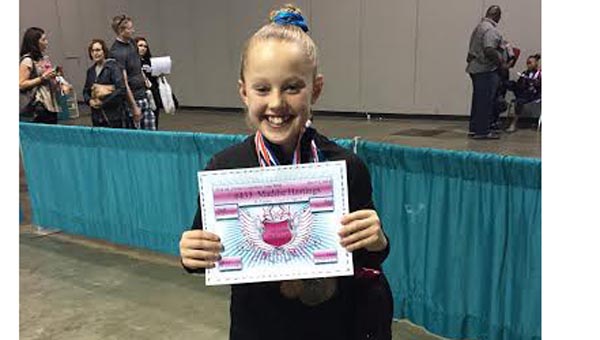 Maddie Hastings took fourth place in the all-around at the state meet in Mobile from Dec. 5-7. (Contributed)

ALABASTER- Maddie Hastings is not your average 10-year-old.

Yes, she attends Thompson Intermediate School with her friends like every other 10-year-old, but it’s what happens outside of the classroom that makes Hastings’ story special.

A gymnast since she was 4, Hastings competed in the state championships held in Mobile from Dec. 5-7, where she placed first overall in the vault, third in the beam, third in the floor exercise and fourth all-around out of 158 competitors at her level of competition.

Gymnasts are broken down into different levels depending on ability. All gymnasts start at the most basic level, level 1, and work their way up the ladder, Brianna Mitchell, Hastings’ coach explained. Age does not have anything to do with levels, as it is solely based on ability. The level system stops at 10, said Mitchell.

Hastings is a level 4 gymnast, and is on pace to qualify for level 5 in the near future, according to her mother, Molly Hastings. As a 10-year-old, to be close to competing as a level 5 gymnast is well ahead of the usual developmental curve.

“She loves it,” her mother explained in a phone interview on Jan. 6. “She is required to go at least four days a week, but she loves it so much she goes five. Each one of her practice sessions last about three-and-a-half to four hours.”

Looking far into the future, a college scholarship may be in play for young Hastings, if she decides to stay with gymnastics through high school.

“It’s definitely a long way off, but if she stays with it through high school, colleges will look her way,” said Hastings. “A lot of girls begin to pursue different things as they get older, like cheerleading. Others just don’t want to stay with it.”

Hastings will look to move to a level 5 qualification before next years’ state championships.