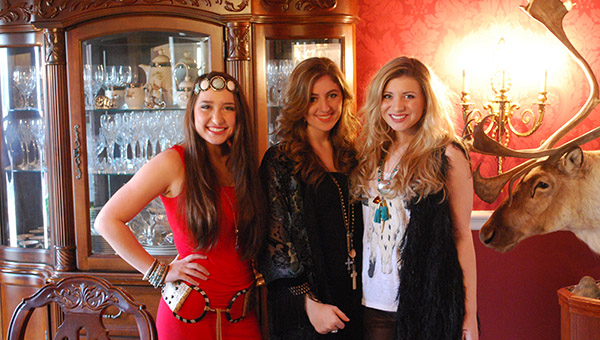 From left, Savannah Coker, Kate Falcon and Victoria Camp have been singing and performing together since May 2013. Their band, Sweet Tea Trio is looking to do big things in 2015. (Reporter Photo/Graham Brooks)

WILSONVILLE–The trio of girls who call themselves Sweet Tea Trio are legally not able to vote yet, but nothing can stop them from showing off their incredible voices and harmony on stage.

Kate Falcon, Victoria Camp and Savannah Coker all reside in three different cities across Alabama. Falcon comes from Southside, Camp from Tuscaloosa and Coker resides in Wilsonville, which in recent months has become the girls central hub to write songs, hold rehearsals and plan upcoming events.

The country music trio has gained more fans and notoriety in recent months, collectively singing with a beautiful blend of southern charm and a little bit of country twang, according to the bands website.

Coker’s father, Bob Coker, is an avid hunter and owns the World Deer Expo held every July in the Birmingham Jefferson Civic Complex. This is where the girls were first noticed and were given a start a few years ago.

“We were at the deer expo and we were singing and this guy Sam Klement, a really good friend of my dad’s, he has a booth there called Huntin’ is Good,” said Savannah. “Growing up, he has always heard me sing and he asked us to come sing in his booth. He said ‘We’re trying to find somebody to write us a theme song for our company. Would you please write it?’ So we went and that summer, we wrote Huntin’ is Good and we videoed it and put it up on YouTube and in four days it got 111,000 views. The Nashville producers found the song and saw how many views it got and so we drove up to Nashville and they’ve really taken us under their wing and helped us out and bringing us record labels.”

Since that video, the girls have played at venues such as Work Play in Birmingham, the Alabaster CityFest, The Row in Nashville and more.

Usually the holidays are a time where the girls can take a break before booking for the spring and summer and events get kicked back up at the start of the New Year.

On Sunday, Jan. 4, it was the first time the girls had gotten together for a rehearsal with a full band, where they practiced in the basement of Savannah’s Wilsonville family home.

The girls already have a sweet tea sponsor; Southern Breeze Sweet Tea based in New Jersey and currently are talking with producers in Nashville.

The trio is expecting big things in 2015 and hopes to gather more fans and attention as the year progresses.

“The cool thing about us is yes we all love to sing, but at the same time each of us have our own different strengths,” said Savannah. “It’s really cool how we mesh together.”

For more information, visit the band’s website at Sweetteatrio.com for videos, event schedules and more.

Gas stations, like this one in Wilsonville, have seen a decrease in the price of gas in the last six... read more