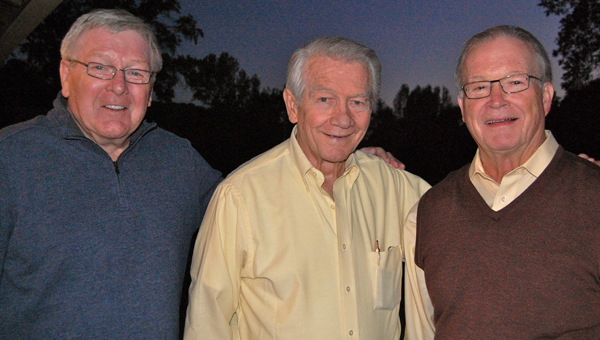 Attendants enjoyed a meal catered by Joe’s Italia and shared stories about the founding and early years of the town.

“Twenty five years ago, we were going around trying to get people to sign a petition,” Hub Harrington, the first mayor of Indian Springs Village, said. “Twenty four years ago, we had a vote and the citizens overwhelmingly voted to incorporate.”

“We needed to make our own town so we can control our own zoning, so we can preserve this valley the way we wanted to preserve it,” Harrington said.

After a “serious piece of litigation,” the town was created, “but that was just the beginning,” Harrington explained.

One of the biggest struggles the town faced in its early years was caring for the roads. A group of citizens volunteered and fixed the roads by hand.

“For 25 years, we’ve had two people who have taken care of the roads in this town,” Harrington said. “It was a labor of love.”

“There are many people who helped start this town who have gone on to their reward,” Harrington said. “We are appreciative of their legacy and what they left us.”

Twenty four years after incorporating, Indian Springs Village has stayed true to its founding values and spirit of volunteerism.

The council and office of the mayor are staffed by non-paid, elected officials, all municipal boards are filled on a volunteer-basis, and the town remains free of a municipal sale and municipal property taxes.

“It doesn’t just run itself,” Harrington said, stressing the need for continued citizen participation. “The average age of our town council when we started was 40, now it’s probably 70. We have to get our young folks involved.”

Harrington encouraged residents to get involved and participate in town activities.

“We are at a crossroads and we have a decision to make,” Harrington said. “Do we really want to have this town and keep on keeping on, or do we not?”

TSGC students faced with a choice

A mock prison cell is the highlight of the choice bus, which made a visit to Alabaster’s Thompson Sixth Grade... read more