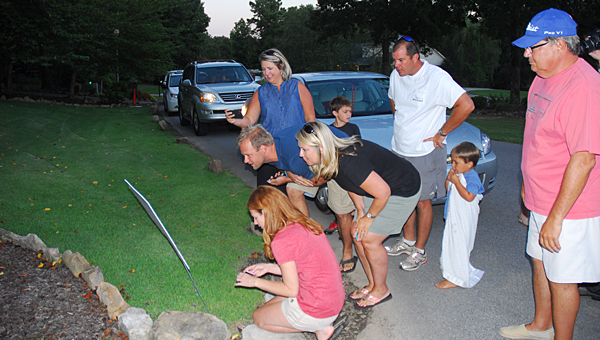 Saddle Lake Farms residents react as the results of an annexation election are posted at the neighborhood’s poling place on July 29. (File)

ALABASTER – Alabaster will pay a total of about $5,300 to fund the recent Saddle Lake Farms annexation election, City Council members said during an Aug. 18 meeting.

The council voted during the meeting to approve about $3,625 to compensate the Shelby County Circuit Clerk’s Office for conducting the neighborhood’s July 29 election. Before the election, Alabaster City Attorney Jeff Brumlow said the city would cover all expenses related to the election.

During the election, Saddle Lake residents voted 210-54 in favor of annexing into Alabaster.

Council members said they likely will vote during a later meeting to approve about $1,700 to cover the rental of two election machines for the election, and will compensate each poll worker $75.

Because the expenses were not originally included in the city’s fiscal year 2014 budget, the resolutions will require budget amendments, said Alabaster City Manager George Henry.

The annexation means the neighborhood is now zoned for the Alabaster City School System starting with the upcoming school year. If Saddle Lake hadn’t annexed into the city, some students in the neighborhood would have been rezoned for Columbiana schools as a result of separation negotiations between the Alabaster and Shelby County school systems.

With the annexation also comes some changes in services for the neighborhood’s residents. The neighborhood will be covered by the Alabaster police and fire departments, rather than the Saginaw Volunteer Fire Department and the Shelby County Sheriff’s Office.

Because Saddle Lake has been connected to the Alabaster water system for several years, the neighborhood’s water provider will not change. No city sewer line currently connects to the neighborhood, so residents will not be required to connect to the city’s sewer system, city leaders said previously.

There’s danger each time a race car driver straps in, to be sure, but there’s also a sense of camaraderie unlike... read more