Local unicyclists take to the trails 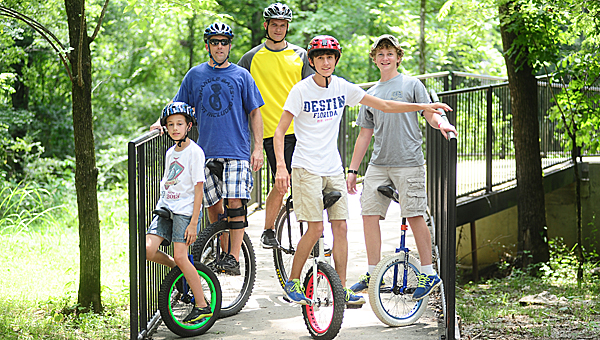 A group of local off-road unicyclists have sparked interest in the unique sport. (Reporter Photo/Jon Goering)

For the past few years, the local unicycling contingency has participated in events such as the annual Bump ‘N Grind mountain bike race at Oak Mountain State Park, but they had trouble finding a nearby event catering exclusively to the muni crowd.

“Geoff and I placed first and second at Bump ‘n Grind race last year,” Rotenberry said before pausing briefly. “Of course, we were the only two in our division.”

Last year, the local unicyclists decided to organize an event of their own.

In November 2013, the group held the first S.T.O.M.P. Munifest at OMSP, drawing in a group of 11 riders from as far away as Utah.

The 2013 S.T.O.M.P. event, which stands for Southern Trails of Oak Mountain Park, was a three-day event featuring more than 25 miles of riding on a gamut of trails and camping each night in the nearly 10,000-acre park.

“Last year, we brought in about three or four from out of town, so it’s not like it’s a huge event right now,” Rotenberry said. “Unfortunately, our sport so far is not bringing a lot of income to the county, but we’re working on it.”

The group has already finalized plans for this year’s Munifest, which will be Oct. 10-12 at the state park.

The event will kick off with a short ride and a cookout at the south trailhead on Friday, followed by rides and fellowship throughout the day on Saturday and Sunday. For full details on the event, visit Stompmunifest.blogspot.com.

The local one-wheeled aficionados said they hope to use the annual muni event to share what has, up until this point, been one of the best-kept secrets in the sports world.

“It’s hard to put it into words. When you’re riding, you’re really right there with nature and everything is flying by you,” Wymer said. “I love it.”