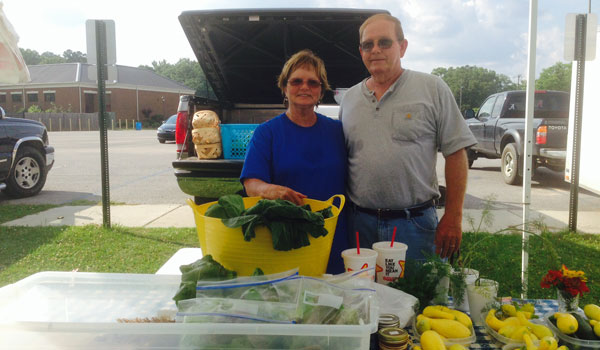 Sandra and Robert Armstrong with R & S Farms sold hydroponic lettuce, herbs and a variety of other vegetables at the first farmer’s market of the season in Calera. (Ginny Cooper/Reporter Photo)

CALERA—Approximately 100 people attended the first farmer’s market of the season at Oliver Park in Calera during the first two hours, estimated Jeff Stewart, an employee with the city of Calera.

Free popcorn and lemonade was available for patrons, and four farms as well as volunteers with Relay for Life came out for the event.

“It’s been nice and steady all day,” said Judy Hale of Burnette Farms, who sold a variety of vegetables and fruit including peaches, squash and green plums.

“We’ll have tomatoes, too, when they’re ready,” Hale said, estimating it would be approximately two to three weeks until the farm’s tomato crop was ready for harvest.

Taylor Hatchett with Boozer Farms said that farm’s crop was affected by the late freeze.

“It’s been a good day, but we didn’t have a whole lot (to sell),” Hatchett said.

Sandra and Robert Armstrong with R & S Farms sold hydroponic lettuce, a special lettuce grown in water, which stays fresh for up to two weeks in the refrigerator, Armstrong explained.

CityFest is Shelby County’s largest event, and will return to Municipal Park in Alabaster this weekend. (contributed) By NEAL WAGNER... read more