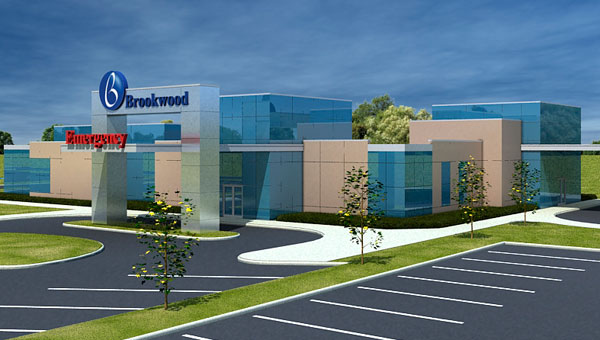 Brookwood’s freestanding ER, slated to open in late 2014, will be at the intersection of U.S. 280 and Alabama 119. (Contributed)

“This is something we’ve been working on for almost 10 years now,” Preston said. “We look forward to moving forward as quickly as possible on construction.”

Preston said construction on the freestanding ER would move forward as soon as details are finalized on the exact location for the building, which is slated to be at the intersection of U.S. 280 and Alabama 119. Brookwood officials hope to have the ER open by the end of 2014.

“We’re ready to get some folks down there and get to work immediately,” he said.

Preston said Brookwood officials began communicating with the communities along the U.S. 280 corridor 10 years ago to find out what kind of medical care was needed in the area. They found that emergency care was the biggest worry, with traffic congestion on U.S. 280 continually worsening.

Brookwood officials filed for a Certificate of Need to open the freestanding ER five years ago, and have dealt with the legal hurdles since then.

Preston said Brookwood officials have worked with the Alabama Department of Public Health to help develop rules for operating freestanding ERs in the state. The Brookwood facility will be the first in Alabama.

Those rules are now in effect, Preston said.

The Brookwood ER is expected to cost $19 million to build.