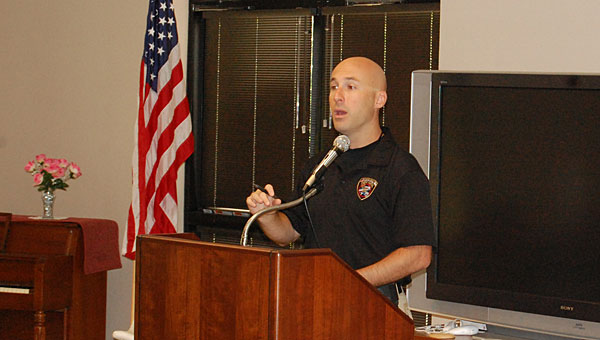 “It’s unreal what people will ingest to get high or to make them feel a different way,” Rauch told the group of about 20 seniors. “There are all kinds of medications in your home that people would be willing to break into your house and steal, or, God forbid, harm you to get.”

“To put that into perspective, a Lortab pill weighs 0.5 grams. There are 1,000 grams in 2 pounds,” Rauch said. “The fastest-growing drug problem is prescription drug abuse. Eighty-five to 95 percent of what we do is prescription medication related.”

Local officers routinely respond to “fish bowl parties,” during which youth fill fish bowls with an assortment of prescription drugs before ingesting handfuls of pills while drinking alcohol.

“That’s how a lot of overdoses happen,” Rauch said.

The Task Force also has seen a rise in cases involving “doctor shopping,” in which a person visits several doctors in a short amount of time to stock up on prescription drugs.

“They are so addicted that they have to do that to feed their addiction, or they are selling it to make a living,” Rauch said.

“Will we ever be able to stop prescription drug abuse? Hopefully,” Rauch said. “Hopefully we can at least make a dent in it.”