James “Jimmy” Ray Jr. was a man known for his faith and his love of Shelby County.

“My dad is my earthly hero. He was not only my dad, he was also my very best male friend and my number one mentor,” son Gary Ray wrote in an email. “His mantra was ‘God, family, country.'”

Gary Ray followed his father’s footsteps to also become a Shelby County engineer. He is now a district engineer for the Alabama Department of Transportation.

“He was a man of unquestionable integrity and, as a public servant, taught me to take nothing extra from those I serve, not even a free meal,” Gary Ray wrote. 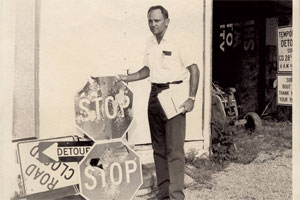 “He really was an extraordinary man,” Ellis said.

“He had an extreme appreciation for Judge Conrad “Bulley” Fowler, former probate judge and fellow World War II Marine,” Gary Ray wrote. “They had a solid bond and goal to pursue every avenue they could to lead this county forward.

“Over the past 20 years in particular, he was so pleased to see this county under such great leadership and praised the continued progress that has been made,” he added. 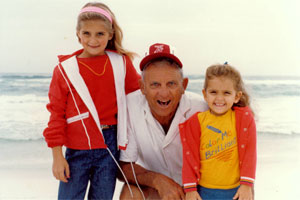 Ray with his two granddaughters in 1980. (Contributed)

Jimmy Ray, born July 3, 1924, attended Shelby County High School, where he met his high school sweetheart, Vivian Wood, whom he was married to for 70 years.

He joined the U.S. Marines out of high school, and served in World War II in the Pacific Theatre.

After the war, Jimmy Ray returned to Shelby County and attended Alabama Highway Department schools and the University of Alabama at Birmingham at night to earn his professional licenses in civil engineering and land surveying, according to his obituary.

During his career, Ray was awarded the National County Engineer of the Year award.

The county named the civil defense building after Ray in 1977. The building, on Alabama 70, now houses Shelby County Environmental Services.

Ray is survived by his wife and three sons, as well as six grandchildren and 10 great-grandchildren, who called him “Big Jim,” according to his obituary.

Ray’s funeral will be Feb. 13 at 11 a.m., and the family will receive friends from 9:30-11 a.m., all at First Baptist Church of Columbiana with Reverend Michael Miller officiating. Burial will follow at Pinelawn Gardens.

In lieu of flowers, the family is asking that donations be made to First Baptist Church of Columbiana building fund. Bolton Funeral Home of Columbiana is directing.

The Alabaster Board of Education voted to lease office space in this building off Alabama 119 to temporarily house the... read more