Business on the back porch 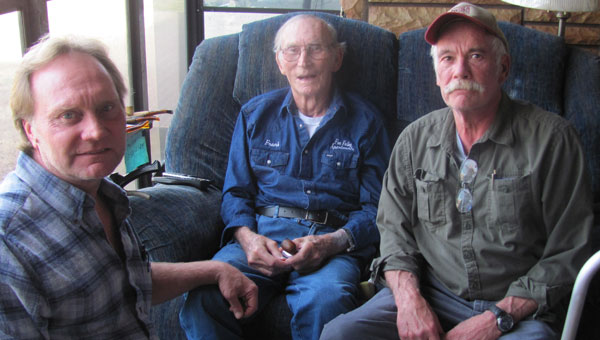 One of our senior citizens, Frank Griffin, was born and has always lived near the old Griffin home, which is now part of the Fox Valley complex. Born in October 1929, Griffin was the third generation to be in the Beaver Dam Creek area near Creek View Elementary.

Grandfather Jones Griffin was the first Griffin to settle in Alabama. He came from Virginia in 1817, built and lived in a log cabin, fought Indians in the Battle of Horseshoe Bend and is buried at the Presbyterian Church in Helena. Percy Griffin (son of Jones) fathered Charles and our subject, Frank.

At the passing of his father, Frank quit school at age 13 and took over “being the man of the family.”

Like most men of that time, Griffin learned to do whatever was needed, be it siding installation, carpentry or farming. Griffin’s wife, Martha Parson, lived in a rental house on the Griffin property so they grew up in close proximity to each other. They married when Griffin was 21 and Parson 17.

Within two years of their marriage, Griffin was at Fort Campbell, Kentucky with the 407th Army Corps of Engineers. Upon his release from service he returned home with the expressed desire to buy some land. The first land purchased was about one hundred acres at the corner of county roads 17 and 44.

Within the next few years Frank and Martha had three sons, Alan, Danny and John.

The Fox Valley Mini Mart and service station turned into a great business venture with its constant business and friendly “neighbor” customers. The Fox Valley Restaurant has been a unique place to dine for 20-plus years. Griffin built his current ranch style house in the late 1960’s.

Martha Griffin took care of the accounting side of the businesses for many years before her death in 2010.

These days most of his business takes place on the enclosed back sun porch of his home with a view of the apartments, the mart, restaurant and the six car garage/workshop.

Rayam reaches out to community