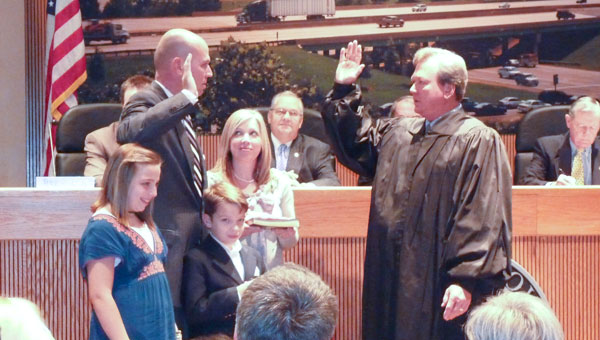 John Lyda, with his family, is sworn in as a Hoover City Council member. (Reporter photo/Amy Jones)

Each member of the new council, including incumbents Jack Wright, Brian Skelton, Adm. John T. Natter, Gene Smith, John Greene and Trey Lott and newly elected member John Lyda, swore to uphold the constitutions of the United States and the state of Alabama.

After Lyda was sworn in, he took his seat on the council for the first time and was greeted heartily by every member of the council before sitting down.

“I’d like to thank the people of Hoover for giving me the honor of serving them for the next four years,” said Skelton at the end of the meeting.

Each of the other council members also thanked citizens for the chance to serve.