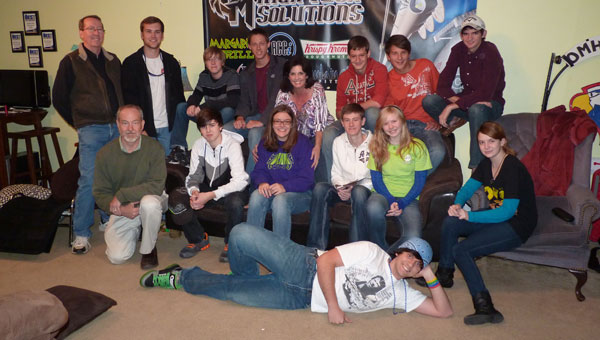 Some members of the Oak Mountain Robotics Club at an Oct. 30 club meeting. (Reporter photo/Amy Jones)

NORTH SHELBY — While Dawn Clemons has three sons of her own, she’s “Momma Dawn” to another group of about 50 kids, all bound together by a love of tinkering and discovering.

Clemons is one of the parents who helps run the Oak Mountain High School Robotics Club, which includes her son Justin. She is a vital reason for the club’s success because for months out of each year, she allows her home to be transformed into one huge robotics lab.

“The kids just really enjoy the camaraderie. Having it here at the house, it’s almost like the kids’ home away from home,” Clemons said. “All the other teams have their facilities at school. This one doesn’t. If they’re not able to have it here, it doesn’t happen.”

While the club is based at Oak Mountain High School, it also includes kids from schools such as Vestavia Hills or local homeschools.

This year’s BEST competition was Oct. 6 at UAB, and the Oak Mountain club came in second overall, good enough to move on to regional competition at Auburn University Dec. 1-2.

Currently, the club meets three nights a week at Clemons’ home, gearing up for the regional competition, which will include 56 teams from states east of the Mississippi River. In the weeks before the competition, the club will begin meeting every night — but that’s just fine with Clemons, she said.

Brian Poythress, a sophomore homeschool student, said he enjoys spending time with the other club members as they problem-solve together to build a working robot.

“I really like engineering. I like to design something, build it and see it work. That feels good,” he said. “I enjoy math, and here we’re actually going to apply math and problem-solving.”

For this year’s BEST competition, participants were given a scenario called “The Space Elevator.” In this scenario, humans have built an elevator that stretches up into space but needs unmanned robots capable of transporting cargo and installing equipment. To score points, participants must construct these robots and prove they can carry out these tasks.

“You have to design a robot that can pick up things, carry them up the elevator and place them in their designated places,” Poythress said. “It was pretty much taking the things we’ve done in previous years and figuring out how to apply them this year.”

The project also has a marketing phase, so other students must design and make T-shirts, buttons and signs hawking the robot and their team.

Clemons said while the kids have to build the robot and market it, they also have to raise the money to enter the competition. It typically takes about $4,000-$5,000 to cover the costs of entering, and if the team makes it to the national competition, it can be around $25,000. But it’s worth it for Clemons and the other parents.