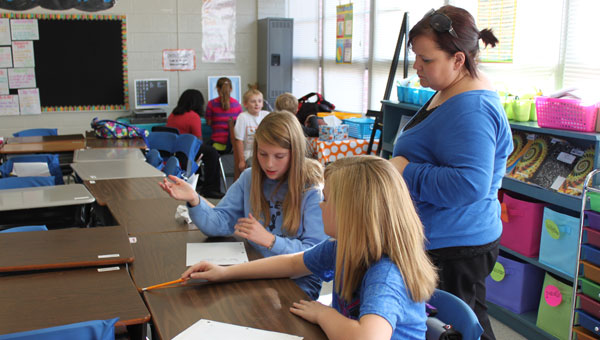 CALERA – The Eagle Extra will print its first edition for this school year Nov. 2 with its new Calera Intermediate newspaper staff.

“We want to encourage them to do what interests them,” said fourth grade teacher Allison Brewer. “We’re trying to let them make it their own.”

Nabors said she’ll place boxes in the library for students to submit questions, though she’s asking the students to remain anonymous.

Grayson McKinney, a fellow fourth grader, said she decided to do her own thing for the paper.

“I’m thinking of doing a column about sports because no one’s really gotten into sports yet,” she said.

McKinney will also design quizzes, like “those in magazines,” but instead of finding out which pop star the students are most like, McKinney said they’ll find out which teachers they are most like.

Fifth grader Olivia Davis was one of the two students returning from last year’s staff.

“I try to encourage them to do something the fifth and sixth graders haven’t seen before,” she said.

Davis said the newspaper is important to inform students about school issues and to pass along information from Principal Brent Copes.

“If there’s something important, the news doesn’t get around very well,” Davis said. “It’s cool to interview the principal. We can get information from the principal about all kinds of different things.”

The newspaper staff meets every Tuesday from 3-4 p.m.

“It’s fun because we do what we really love to do, but it’s harder than it looks,” Davis said.

Valley Intermediate School fifth-graders race to the finish during an attempt to set a Guinness World Record for the most... read more