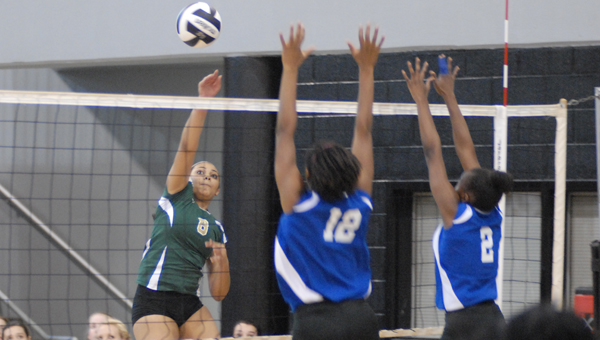 Pelham's Ja'don Christian plays the ball over the net in the Panthers' pool-play win over Ramsay in the Dig In the Park Tournament on Oct. 6. (Reporter photo/Mickel Ponthieux)

NORTH SHELBY – After finishing fourth in their pool, the Thompson volleyball team swept through the silver bracket at Spain Park’s Dig In the Park tournament on Oct. 6.

The Lady Warriors found their groove in the quarterfinals of the sliver bracket against region foe Prattville. Thompson downed the Lions in straight sets (25-22, 25-18) led by eight kills from Katie Guiser.

Thompson carried the momentum into the semifinals with a 25-16, 25-19 win over Ramsay. Guiser and Kelsea Bivins each posted five kills and two blocks to propel the Warriors into the finals.

The Warriors avenged a pool play loss to Chelsea with a 25-23, 25-23 victory to win the silver bracket final game. Guiser led with seven kills with Bivins and Allen each adding five kills. Ashley Fondren had 11 assists. Tara Miller added seven assists with a team-high five aces.

Oak Mountain, Pelham and Spain Park each advanced to the gold bracket after finishing in the top-2 of their respective pools.

Pelham bounced back from a 16-25 loss in the first set to even the quarterfinal match against Curry with a 25-23 win in the second set. However, the Panthers couldn’t get things rolling in the decisive set to fall 6-15.

The Spain Park volleyball team took second in their pool with wins over Shades Valley and McAdory to advance to the gold bracket quarterfinals. The Lady Jags fell to Mountain Brook in the opening round of bracket play.

The Warriors' John Thompson makes the tackle on Spain Park's Otis Harris in the backfield for a loss in Thompson's... read more