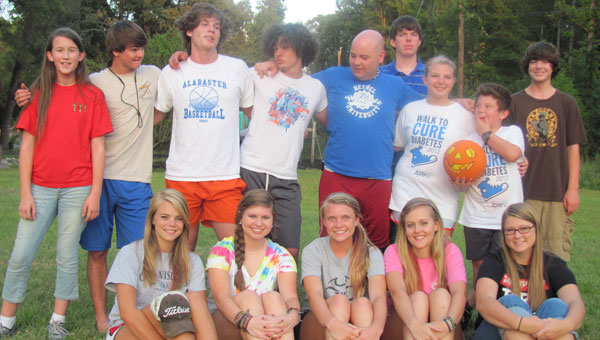 Darren, fifth from left, is active with the youth ministry at Alabaster's First Presbyterian Church. (Contributed)

Darren Kennemer is a native son of the Shoals area of northwest Alabama where his family has roots 150 old and has been Presbyterian for more than a century.

After high school, Kennemer attended the University of Florence then transferred to Bethel University in McKenzie, Tenn., where he sang with the Bethel Balladeers, was active in his fraternity and the Student Government Association.

In 1999 Kennemer received his Bachelor of Arts in psychology. His Master of Divinity degree was earned in 2003 from Memphis Theological Seminary.

During seminary, Kennemer was required to complete a semester of internship with a hospital chaplain. “I found part of my calling in this work” said Kennemer.

Two years involving a residency of clinical pastoral education followed at Memphis. In 2006, Kennemer relocated to the Birmingham area, specifically to the Veterans Administration Hospital where he has been chief chaplain since 2011.

“My patients are receiving exceptional health care that isn’t costing their life savings, but it is sometimes overwhelming to see the results of the violence of war,” he said.

Kennemer, his wife Julie (teacher) and children Aidan, age 8, and Ellie, age 4, are Alabaster residents and began worshiping with First Presbyterian of Alabaster in 2008. Kennemer is the associate pastor and has a faithful following of teenagers to whom he serves as youth leader and pastor.

Kennemer tries to stick with the teachings of Jesus.

As associate pastor, Kennemer is the right-hand man to Senior Pastor Mark Davenport. Kennemer steps in to visit the sick, preach, attend meetings, serve on committees, officiate at weddings, funerals, baptisms and dozens of other duties.

This is a man who truly wears many hats.

Community columnist Sandra Thames can be reached by e–mail at bobthames1942@yahoo.com.

ASEF active in the community