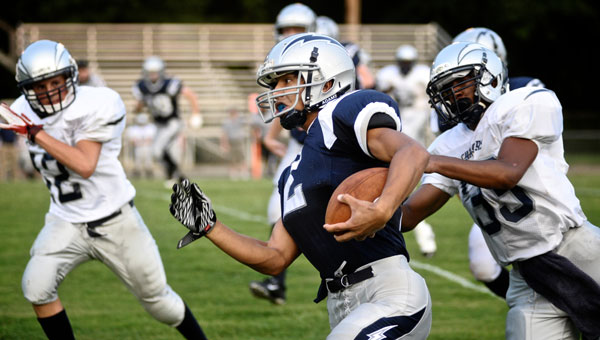 Lightning coach Del Clayton said he could not find many mistakes with his team’s performance.

“For the first game, I thought it was a real good, solid effort,” Clayton said. “It showed that we had been working hard through the fall camp. The team came out ready to play and executed all night.”

Clayton said he was pleased that his team was able to play many younger players.

“For the first game that is always a plus; that gets them ready for the season,” Clayton said.

Punt returner Clay O’Neal set up the Lightning’s first score with a 47-yard return. A few plays later, quarterback Andrew Thompson ran for a 23-yard touchdown putting the Lightning on top 7-0 after a Dru Bell extra point with 7:46 left in the opening quarter.

After recovering the ensuing kickoff, Evangel went back to work scoring on the next play with a 27-yard touchdown pass from Murphy to Letson, extending the lead to 14-0, after another Bell extra point. Pete Sullivan stretched the lead even more with three-yard touchdown run with 21 seconds left in the quarter. Bell missed the extra point and the quarter ended with Evangel leading 20-0.

In the second, Thompson found Caleb Hoge for a 21-yard touchdown pass at the 5:43 and Murphy added a 17-yard fumble-recovery touchdown with 3:37 left in the half. Bell made both extra points and Evangel led 34-0 at the half.

The Lightning picked right back up where they left off in the first half, when Sam Stockman had a 6-yard fumble recovery touchdown with 9:51 left in the third quarter. The 2-point conversion try was no good and the score stayed at 40-0.

Thompson threw his second and final touchdown pass of the night on a long 53-yard pass to Letson with 5:22 left in the third, making the score 47-0 after another Bell extra point.

In the fourth quarter, David Baggett ran for a 20-yard touchdown at the 10:53 mark extending the lead to 53-0. Bell added an extra point making it 54-0

The final touchdown of the night for the Lightning was the team’s longest when Shepherd ran for a 63-yard score. Peter Lau added a 2-point conversion run, ending the scoring at 62-0.

Shepherd gave his team credit for his touchdown, while he said all he had he think about was to run as fast as he could.

“That was all I was thinking, that and don’t trip,” Shepherd said.

The Lightning have a week off before facing Tabernacle Christian on Aug. 31.