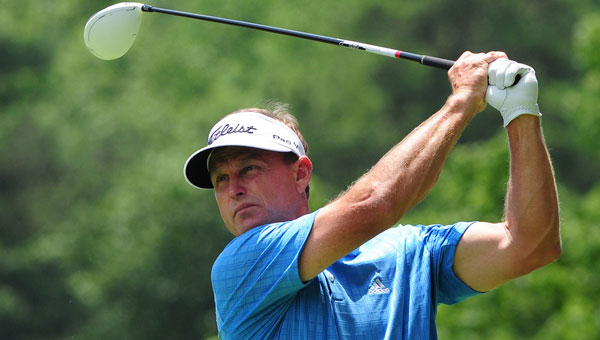 Bill Glasson, a Stillwater, Okla. native, follows his drive on the 10th hole June 8 in the second round of the PGA Champions Tour's 2012 Regions Tradition at Shoal Creek. (Reporter Photo/Jon Goering)

SHOAL CREEK — Bill Glasson hasn’t used any free moments to take a gander at the leaderboard through his first two rounds in the PGA Champions Tour’s 2012 Regions Tradition at Shoal Creek.

Glasson, who hasn’t relinquished his lead since he birdied his second hole in the opening round, has no interest in how his peers are faring in the circuit’s major championship.

“‘If you lose your focus on this course?,'” Glasson pondered, “it would not be a good recipe for me.”

Glasson’s focus has been scissor sharp as he ran his streak of bogey-free golf to 33 holes to start the Regions Tradition through the first two rounds of the major championship before running into trouble on hole No. 16, a par 3, in the second round June 8.

Glasson posted his first bogey of the tournament at No. 16, but it was the only hiccup for the Stillwater, Okla. native, who ran away from the field after posting a three-under par 69 in the second round.

“(The bogey) was inevitable,” said Glasson, who is searching for his first win since capturing the 1997 Las Vegas Invitational title on the PGA Tour. “I was glad to get that out of the way.”

“I think I actually played a little bit better today than I did yesterday,” said Glasson, who has his son, Max, caddying for him. “I kept myself out of trouble for the most part.”

Cochran, a Paducah, Ky. native, climbed his way up the leaderboard to second after carding a 4-under par 68 in the second round, which gives him a tournament total 7-under par 137.

Cochran posted two birdies in his final three holes to cement his status as a challenger for the Lyle Anderson trophy heading into the weekend. Cochran said course conditions are making him play one shot at a time, which has helped his game.

“I think Shoal Creek has been good for me because I haven’t been playing well,” Cochran said. “I’ve been getting ahead of myself. It’s a very difficult golf course and it seems to slow me down a little bit, which is good for me.”

Surprise leaders after Tradition first round

Bill Glasson, a Stillwater, Okla. native, tips his hat in appreciation of the crowd's support after making a putt for... read more