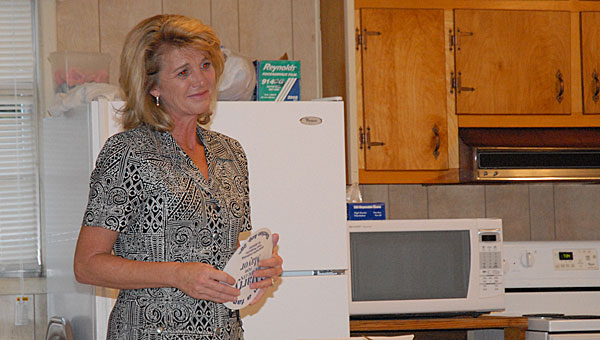 Handlon, who also ran during the 2008 mayoral election and fell to incumbent Mayor David Frings by a margin of 55 percent to 42 percent, said serving as the mayor of Shelby County’s largest city would be her “passion.”

“I’m not going to tell you I will do anything I can’t do. I want to be conservative with our spending and be fresh with our ideas,” Handlon said to the crowd of about 20 gathered at the church. “I believe Alabaster can do better.”

For the past several years, Handlon said she has been working with the Alabaster Sports and Entertainment Foundation to make “noticeable improvements” to local schools. ASEF has helped to raise money to make improvements at Thompson High School’s Larry Simmons Stadium, install a new gym floor at THS and several other projects.

“I think Alabaster needs a fresh start,” Handlon said. “Alabaster’s mayor is a part-time position. I’m going to be your full-time mayor for part-time pay.

“We need to be more efficient with what we have,” she said.

The qualifying period for Alabaster’s municipal election begins on July 3, and the election will be held on Aug. 28.

Also during the meeting:

-Alabaster Ward 1 Councilwoman Sophie Martin announced she plans to run again for the Ward 1 seat during the upcoming election.

“We’ve completed a lot of projects and made tremendous progress in Ward 1 and our city,” she said.

-Martin announced the Alabama Department of Transportation recently installed large pedestrian crossing signs along U.S. 31 between Alabama 119 and Interstate 65 to make drivers more aware of foot traffic along the road. Martin said the city is working to possibly install a caution light near the intersection of U.S. 31 and Old 31 near the Shelby County Instructional Services Center.