Eagles get revenge against Hoover 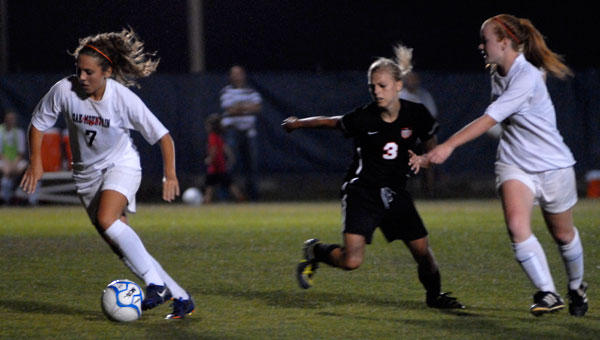 NORTH SHELBY — The contrasting feeling Oak Mountain High School senior forward Vicki Hill and her teammates have experienced against rival Hoover in the playoffs from last season to this season couldn’t be more extreme.

The Eagles walked off the turf at Buccaneer Stadium a year ago with their heads hung low following a 3-2 setback to Hoover after a penalty-kick shootout in the second round of the Alabama High School Athletic Association Class 6A playoffs last year.

Oak Mountain players burst to the sideline to celebrate with fans on their home field following a 6-1 win over the Bucs in a playoff rematch May 1, which earned the Eagles a trip to the Class 6A playoff quarterfinals.

“Last year was heartbreaking,” Hill said. “This is the most incredible feeling ever. It’s revenge.”

Oak Mountain didn’t give Hoover a chance to play the role of heartbreaker Tuesday night after jumping out to a 3-0 lead in the first half.

Hill scored the Eagles’ first goal on an assist by Bailee Harnett 15 minutes into the match.

Emma Robinson pushed the Oak Mountain lead to 2-0 after faking the Hoover goalkeeper with a dribble to the left before firing off a shot with her right foot with 22:15 left in the opening half. Hill capped the scoring for the Eagles in the first half when Harnett quickly possessed the ball at midfield and sent it forward, which allowed her to chip a shot over the top of the Hoover goalkeeper.

Haley Gerken gave Oak Mountain a 4-0 lead with her header at the 21:01 mark in the second half. Julianne Jackson, who recorded an assist on Gerken’s goal, pushed the lead to 5-0 after crossing up the Hoover goalkeeper and netting a breakaway goal with 16:17 remaining in the match.

The Bucs snapped the shutout following a goal with just under 10 minutes left in the second half. Harnett, who finished with four assists in the victory, capped the scoring for Oak Mountain with her header in the final minutes.

Oak Mountain goalkeeper Jill Hester finished with one save in the match.

Oak Mountain coach Pete Dakis said the Eagles are hitting on all cylinders through their first two playoff matches.

“The girls have stepped it up in practice,” Dakis said. “Their intensity is up.”

The Eagles will travel to Grissom in a Class 6A quarterfinal match May 5.

FROM STAFF REPORTS Thirteen high school soccer players and two coaches from Shelby County have been selected to participate in... read more