Choosing most beautiful yard a task for judges 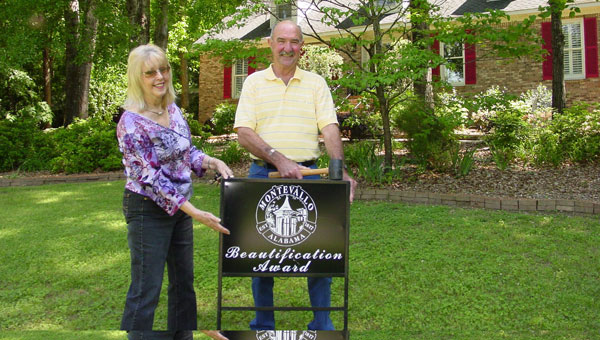 Last week you folks in Montevallo may have noticed, with some suspicion, a car with several passengers driving slowly or stopping briefly along the street.

No need for alarm; it was only the appointed judges seeking out the most beautifully landscaped sites in town.

After much searching and deliberation — those were difficult decisions, for there are so many attractive yards — the first place residential beautification award went to David and Judy Morgan of 450 Hidden Valley, and second place winners were Todd Harbin and Peter Santillo of 1004 Princeton Park in Heritage Trace. Runners-up were Johnny and Carol Jones, 240 Hicks Street; Jeff and Pam Lucas, 340 Shoshone; David and Michele Pawlik, 190 Nashua and Hoss and Tina Eddings, 143 Heritage Trace Parkway.

First Baptist Church captured the top award for the prettiest landscaped church, while second place went to Montevallo Presbyterian, and third to the Church of the Holy Comforter.

The first place winner for apartment houses went to Town and Country Apartments, and second place to Cobblestone Creek Apartments.

Montevallo Elementary School took first place in the schools category; followed closely by the University of Montevallo front campus, and the middle school.

In the mini-farms, a fairly new category, the No. 1 award went to Allen and Betty Fulton of 2355 Shelby County 15. Donny and Debbie Kennedy of 2256 County Road 15 took second place.

The businesses were not excluded: Blue Phrog on Main Street won first place, and Huddle House on Alabama 25 second place.

The award for year-round cleanliness and appearance went to Huddle House.

The three judges ranked each site from one to 10 in the areas of curb appearance and creative design; attractive overall appearance; use of natural features, rocks, etc.; trees and other woody vegetation; and color —annuals, perennials and yard art.

The contest is a project of the Montevallo Arbor and Beautification Board. Herschel Hale is their chair, and other members are Linda Cicero, Browyne Gillespie, Kathy Weese, Joan Pickett, John McKinnon, Bill Legg, Kevin Thornthwaite Melinda Nix and Rusty Nix.

Take a ride to view these award-winning areas; the weather is beautiful, you’ll learn something new about your town and you can make plans to have that beautification award sign in your yard next year.

Catherine Legg can be reached at clegg2@bellsouth.net.