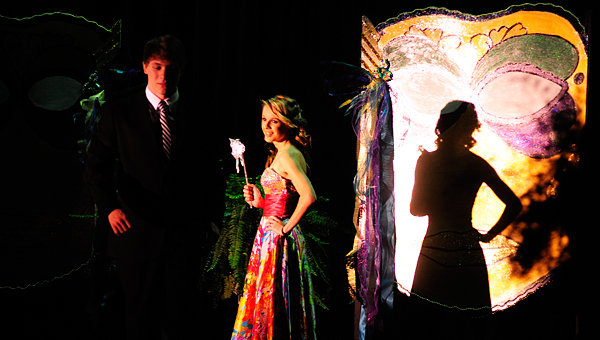 The Behind the Glamorous Mask fashion show featured formal wear modeled by SOT students. The money raised from the fashion show will fund a trip to New Orleans, La. for business students and Future Business Leaders of America members.

“The young entrepreneurs are working on a project about rebuilding the economy, and New Orleans is a primary example of that,” said Dora Montgomery, an instructor at the Business and Finance Academy and the Future Business Leaders of America sponsor at the School of Technology.

The three-night trip will be the first out-of-state and overnight trip in the schoolÕs history.

“(We’re going) to see how New Orleans has rebuilt their economy,” Montgomery said. “It’s a place full of diverse culture as well, so thatÕs why we selected New Orleans. ItÕs a different learning opportunity for the students.”

Second Elegance in Homewood provided the majority of gowns in the show, and some students will be modeling their own prom attire.

Grant Walkup, a junior at SCHS and FBLA student, donated his time to provide music for the show.

Jennifer Nesbitt, fashion show coordinator and former Calvin Klein marketing coordinator for the state of Alabama, was glad to see the large response from SOT students who wanted to get involved.

“They’re coming from all walks of life at that school,” Nesbitt said. “It was such a great response when the opportunity came about. We have students from various departments at the SOT who are involved.

“The students have taken ownership of (the show) and are extremely excited about the opportunity they are receiving,” Nesbitt said. “This opportunity not only allows them to participate in a fundraiser for their trip but it also boosts their self-confidence by being onstage.”

“This school is pulling together, and students have volunteered to be a part of it,” Montgomery said. “Students from all walks of life are on that stage tonight, so I applaud them. I’m proud and appreciative.”