ALABASTER — Harmon D. Acker, 43, of Alabaster, was arrested at about 1 p.m. on Saturday and has been charged with second degree criminal trespassing.

Acker is the brother of Danny Acker, who has been charged with several counts of sexual abuse. 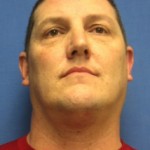 Alabaster police responded Saturday to a burglary in progress call at Thompson High School. A witness notified police that he had seen a man trying to make entry into the school through a window, Alabaster Police said in a press release.

Acker was taken into custody at the scene without incident. Evidence at the scene did indicate that Acker did make entry into the school.

Officials with the Shelby County Board of Education signed a warrant for his arrest. He was released from the Alabaster Jail after posting a $500 bond.