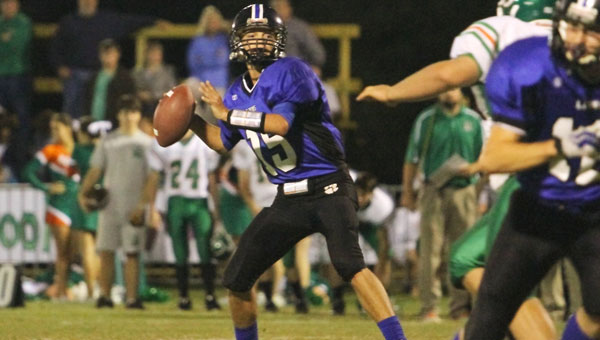 Kingwood Christian quarterback Gavin Sumrall drops back to pass in the Lions' loss to Hooper Academy on Sept. 30. (Contributed/Jimmy Mitchell)

Charles Robinson returned a kickoff for a touchdown and Luke Edge converted to field-goal attempts to account for the scoring in the game for the Lions.

Edge nailed a 37-yard field goal attempt with 1:05 remaining in the second quarter to temporarily cut Hooper Academy’s lead to 14-3. The Lions trailed 22-3 at halftime following a late touchdown by Hooper Academy.

Robinson returned the opening kickoff in the second half 75 yards for a touchdown and Edge added the extra point to cut the lead to 22-10, but the Lions couldn’t cut into the lead down the stretch. Edge capped the scoring for the Lions  with a 34-yard field goal.

Robinson led the Lions as he rushed for 45 yards on 16 attempts. He also caught eight passes for 66 yards in the defeat.