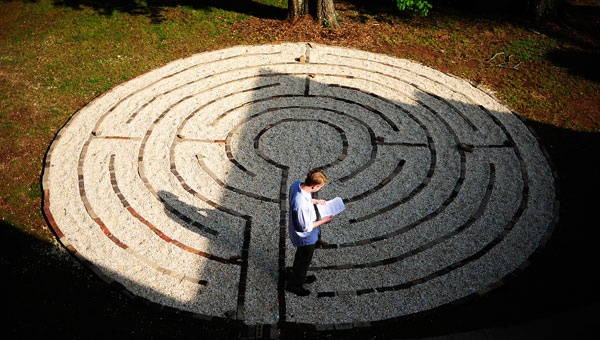 UM senior Justin Barron, Huntsville, pauses and reads at the 14th stage of the Stations of the Cross labrynth at St. Andrew's Episcopal Church in Montevallo. (Reporter Photo/Jon Goering)

MONTEVALLO – The wife of St. Andrew’s Episcopal Church’s reverend developed a labyrinth in the church’s yard to offer the people of Montevallo a place for peaceful meditation and reflection.

Sandie Wesley attended a labyrinth training at Veriditas in San Francisco, and decided to bring the practice back to her Montevallo church. Veriditas is a non-profit organization dedicated to “introducing people to the healing, meditative powers of the labyrinth,” the organization’s website said.

“A labyrinth is a walking meditation. Most people think of mazes, but it’s actually different. A maze, you have decision points and dead ends,” Wesley said. “In a labyrinth, you have one path that leads to the center. The belief is that while you follow the path in, you’re able to disengage your thinking mind, quiet your mind.”

University of Montevallo students worked during the weekend before Easter to create the labyrinth out of gravel and bricks. The church then held labyrinth walks on Good Friday, April 22, to facilitate the Stations of the Cross.

The 14 Stations of the Cross correspond with scriptures and prayers that represent the final days of Christ’s life, Wesley said.

“Labyrinths are used in churches. They’re really good for meditation,” she said. “Creativity can bloom during that time, because you’re focused on letting go, just one foot in front of the other.”

Judy Rogers, a Montevallo resident, stopped by St. Andrew’s to experience the labyrinth.

“I’ve been inside a labyrinth before at our Presbytery meeting, but it was set up on canvas,” Rogers said.

Wesley said she plans on holding a moonlight labyrinth walk soon, with candles lighting the path.

“When you walk the meditation path, your mind disengages, you vacate intellectually and you let your spirit go,” Wesley said.

St. Andrew’s will maintain the year-round labyrinth without the Stations of the Cross for Montevallo citizens.

Calera High School pitcher Conner Bush delivers a pitch to the plate in the Eagles' 13-3 win over Holt in... read more