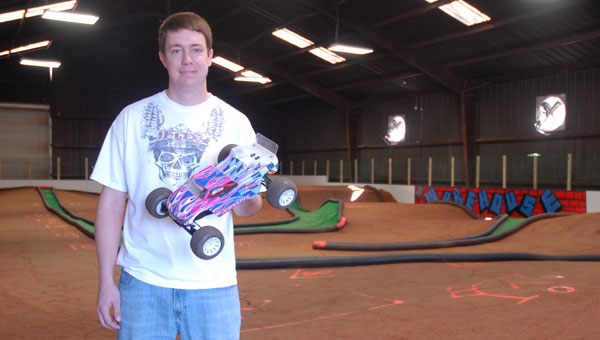 Helena resident Alan Burton recently opened the Warehouse Hobby Raceway in Helena, continuing a hobby he has been enjoying for more than 15 years. (Reporter Photo/Neal Wagner)

When Helena resident Alan Burton was 13 years old, an afternoon cutting a family friend’s yard led him to a hobby he has been passionately following for more than 15 years.

After cutting grass for one of his uncle’s friends, Burton went into the man’s house and saw one of the most advanced remote-control cars he had ever seen.

“We went in and he had one of the cars sitting up on his shelf,” Burton said. “I remember thinking ‘that looks a lot more serious than a Radio Shack car.’

“We went outside and he let me drive it around, and I remember thinking it was so much faster than anything I had ever driven,” he added.

Burton immediately became obsessed with building his own model remote-control car, and, with the help of his father and uncle, he soon had the ability to do so.

“My dad and uncle helped me get my first car, and I was hooked,” said Burton, who is now 30. “When I was 23 years old, I got to be really good at it and I started running (races) for different companies.”

Over the years, Burton has owned and raced several different cars, including one-tenth scale trucks and one-eighth scale buggies.

“The one-tenth scale short track trucks are real fun to beat and bang around on the tracks,” Burton said. “But my favorite is definitely the one-eighth scale buggy. It’s a little more complex, so it’s better for more advanced drivers.”

After Burton began racing remote-control hobby cars professionally for companies such as Serpent Model Racing Cars and Byron’s Fuel, he began to race at tracks across the country.

“A lot of the tracks are outdoor, and are pretty far out in the country,” Burton said. “Sometimes, it’s just a dirt track someone has built in their backyard.”

Because Burton and his fellow racers frequently had to deal with inclement weather and damaged outdoor tracks, he began to think of creating a more controlled racing environment.

After searching for “a while,” Burton found the ideal location a few blocks from his house. A pair of disused warehouses off Rolling Mill Street in Helena proved to be ideal locations for an indoor hobby raceway.

“The first time we walked in here, stuff was just stacked to the ceiling. This whole place was full of stuff,” Burton said as he stood in what is now the Warehouse Hobby Raceway. “We had to build everything in here by hand.”

The once-unused nearly 8,000-square-foot facility now houses a 110-foot-by-55-foot track area, a 32-car maintenance and setup area and a balcony overlooking the raceway.

“That I know of, Alabama has never had an indoor raceway like this before,” Burton said. “It’s just a more consistent place to race, and it’s easier to keep it up.”

The facility also features a cable buried under the track, which reads transponders on each car and gives race spectators a real-time view of the race standings.

By running the race track, racing professionally for companies and completing repairs for local hobby car enthusiasts, Burton has turned what began as a childhood hobby into a full-blown career.

Vincent High School guard Ben McKinney drives to the basket in the Yellow Jackets' 68-61 win over Section in the... read more