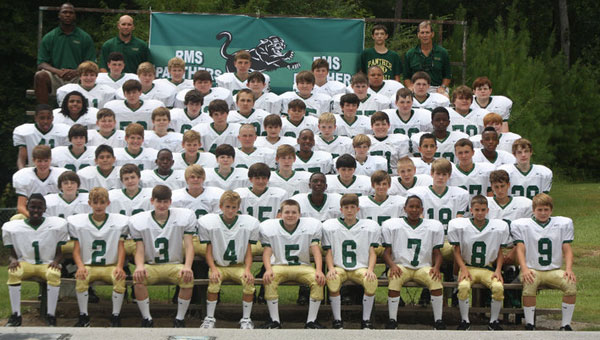 The first two weeks of the fall football season have resulted in dominating victories over area opponents for the Riverchase Middle School Panther football team.

Quarterback Hunter Stovall was 14 for 27 passing for 206 yards with two touchdown passes, and rushed for 160 yards and three touchdowns in the jamboree.

Other offensive stars were Zach Allison with six catches for 126 yards and two touchdowns, Paul Christian Benton with three receptions for 31 yards and Chase Sherrer with one catch for 24 yards, John Taylor Kepler with two receptions for 14 yards and eight rushes for 42 yards.

Taylor Petty also had two catches for 11 yards and six rushes for 118 yards and two touchdowns, and kicker Austin Bowen made all eight of his extra point attempts in the game.

The Riverchase offense recorded more than 250 yards in the game, and Stovall completed 71 of 10 passes for 125 yards and two touchdown passes. He also rushed for more than 50 yards and one touchdown.

Bowen remained perfect on the season, hitting all four of his extra points and a 25-yard field goal from the right hash mark in the fourth quarter.